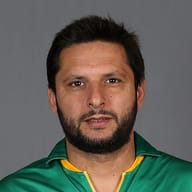 For the next few years, Afridi's batting took prominence after hitting that ton. He soon became a crowd-puller for just his eccentric batting. As entertaining as it was to the viewers, it sometimes proved to be infuriating to his teammates. His then captain, Wasim Akram, had repeatedly asked him not to throw his wicket away, but nothing could change Afridi's ways. This reckless streak extended to the highest format, the Test matches, and he was quickly sorted out by his opponents. After having some limited success in the longest format, Afridi quickly realized that he lacked the temperament for the same and announced his retirement from Tests in 2006, after having played just 26 games.

He was more successful in the limited-overs format, where he influenced many games with a stunning cameo. After a while, his career completed a full circle as his quickish leg-breaks gained more importance. His tendency to rush through his overs was almost as influential. He mixed it up by bowling googlies and the quicker ones. On occasions, he even delivered the conventional off-break. This was interspersed with some stunning knocks such as the one against India in 2005 when he got to his hundred in 45 balls. This lethal combination made him one of the most valuable players going around in the shorter forms of the game. In fact, Sanath Jayasuriya and Afridi are the only two men to have made over 4,000 runs and taken over 300 wickets.

The advent of T20 saw a rise in Afridi's value. He was named the Man of the Series in the inaugural T20 WC in 2007 when Pakistan reached the final. He also scored fifties in both the semi-final and the final of the 2009 T20 WC and this time around, it helped Pakistan win the tournament. Soon after, he was named the captain of the T20 side. In 2010, after Mohammad Yousuf's exit, he was handed over the ODI reigns too. He even returned briefly to Tests to lead Pakistan in England, but retired immediately after the first game at Lord's, re-affirming that he was not suited for Tests. This did not hold him back from leading the Pakistan ODI team in the 2011 World Cup that saw him at the peak of his bowling prowess. He emerged as the joint highest wicket-taker along with Zaheer Khan. Both had 21 wickets.

Controversies have dogged him throughout his career. After the age speculations died down, he was banned for two ODIs and a Test in 2005 after cameras caught him deliberately scuffing up the pitch with his boots in a Test against England. That was not the end of it, in 2010 he was found guilty of ball tampering when he was caught biting the ball in a ODI against Australia. A ban for two T20Is followed. In 2011 after a tour of the West Indies and following a rift with Pakistan coach, Waqar Younis, Afridi was sacked as the captain of the squad. His response to what he saw as unfair treatment being meted out by the board was to announce a conditional retirement. He soon sought a NOC from the PCB that would allow him to play for Hampshire. It was granted after both parties agreed to an out of court settlement.

In October 2011, Afridi withdrew his conditional retirement and was selected for the Sri Lanka tour. In the fourth ODI, Afridi became the only cricketer to score a half-century and take five wickets on two separate occasions in ODIs. He also became the first person to score a fifty in his 50th T20 International in 2012. During the first ODI against West Indies in July 2013, Afridi produced an exceptional all-round performance. He scored an aggressive 76 to help Pakistan reach a respectable total of 224 and annihilated West Indies with a remarkable bowling spell of 7-12. In late 2013, Afridi had a decent run with the ball against both South Africa and Sri Lanka.

Severely criticized for his lack of quality performances in recent times, Afridi silenced his critics in the 2014 Asia Cup by delivering outstanding back-to-back performances. In what was quoted to be a virtual semi-final against India, he hit a quick-fire 34 not out, giving Pakistan a thrilling last-over win. He bettered his previous performance in the next game against Bangladesh, equalling his own record for the second-fastest ODI fifty for the third time. Both these performances not only ensured Pakistan a spot in the final but also India's elimination from the tournament. Unfortunately, Afridi suffered a hamstring injury during that time. He did not get a chance to bat in the Asia Cup final against Sri Lanka and was mediocre with the ball as well. Afridi played some useful hands with both bat and ball in the T20 WC, but could not get Pakistan to qualify for the semi-finals.

After Hafeez resigned from T20 captaincy, the Pakistani selectors went back to Afridi to lead them again. He also led the team when Misbah ul Haq decided to take a break in the third ODI against Australia. Afridi, always known for his irresponsible shots, curbed those instincts against New Zealand. The allrounder batted sensibly in almost every game, he made two fifties to show for it. Afridi, with his all-round skills, was expected to be a force to reckon with in the 2015 World Cup in Australia-New Zealand and got cameos in nearly every game as well. Pakistan ended with a quarterfinal finish and Afridi retired from the 50-over format, insisting that he would continue in the shortest format of the game.

There were talks that Afridi was appointed captain in T20Is solely because he had informed the PCB regarding his retirement after the 2016 T20 WC. While there wasn't any clarity on this topic, it certainly did cause confusion within the team and in the Board. Pakistan's poor performances in the 2016 T20 WC was the last straw and Afridi saw himself dropped after the tournament after the expected 'retirement' hadn't come.Afridi became the butt of social media jokes for his penchant for retirements that never lasted long. He retired five times in his career, only to return on four occasions. However, in February 2017, he announced it for one last time and decided to bid adieu to international cricket. Afridi has been enjoying his time in the franchise T20 leagues across the globe. He seems to have found his mojo back in T20 cricket as showcased by his performances in the 2017 Natwest T20 Blast in England where shone for Hampshire. A blistering century at the top of the order showed the world glimpses of his potential while his crafty leg spin bowling continued to create an impact. The BPL season has also seen him making a mark for the Dhaka Dynamites. Leaving the cricketing part aside, the aura that Afridi brought to the game was and shall always remain unparalleled. He will never change and so, till he retires from all forms of cricket, expect him to entertain the crowds to the fullest.