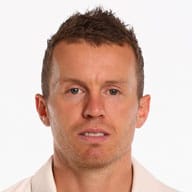 Having made his First-class debut in 2005, it took only a few seasons for Siddle to get the national call up. It came for Australia's tour of India in 2008 and he made an instant impression on the trip. His very first delivery was a snorter that struck Gautam Gambhir on his head and the first Test scalp was the legendary Sachin Tendulkar. Siddle continued to be a part of Australia's pace attack although he was mostly the first change bowler in the side.

A bowler who knew his limitations in and out, Siddle was a hard worker who was as gritty as they come. He would never shy away from bowling long spells and often, his unwavering spells would provide a turning point in the game for Australia. In 2010, Siddle had the rare distinction of achieving a Test hat-trick on his birthday. He couldn't quite create the same ripples in ODI cricket and after a brief stint, was overlooked for better limited-overs prospects.

In the 2013-14 season that had two consecutive Ashes series plus a tour of South Africa, Siddle was on song, especially while regaining the urn at home through a ruthless whitewash. He provided to be the ideal third seamer for the fantastic new-ball duo of Ryan Harris and Mitchell Johnson. Against the Proteas too, Siddle played the able support cast as the Australians capped off their Ashes glory with another valuable series victory. Towards the later part of 2014, Siddle started losing a bit of pace and that affected his selection in the XI with Australia preferring those with better speeds.

However, in the fag end of the 2015 Ashes series in England, Siddle briefly made a comeback to the Test side and then featured in a few games before being left out after the Perth Test defeat to South Africa in November 2016. Australia ended up losing that series eventually and decided to revamp their red-ball squad a touch, which included blooding younger men to support Mitchell Starc and Josh Hazlewood. An aging Siddle was overlooked primarily due to his pace and that criteria saw the budding Pat Cummins getting a look-in for the future assignments.

For someone who has had a terrific red-ball career, Siddle never bloomed into a good one day bowler. His exploits in the BBL always were good but somehow that never materialized into anything substantial in the 50-over format. May be lines and lengths were not the only parameter for a white ball bowler anymore.

His red ball career though took a surprising turn for good as he was recalled to the Test side after two years to tour the UAE for two Tests against Pakistan. Few typical Siddle-like tireless spells convinced the selectors that the pacer still had international cricket left in him. So much so that Peter Siddle was picked for the Ashes 2019.