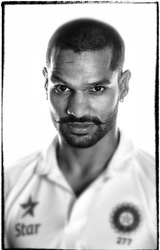 Dhawan, with his side-on stance and negligible trigger movement, is strong on the off-side with his cuts and drives. However, his leg-side game tends to be scratchy and hurried in stark contrast to his off-side game. A natural stroke-player, Dhawan has the gift of picking the line of the ball early and the length of the ball, allowing him ample time to get into position for any shot that he wishes to play.

After a string of excellent domestic performances, he was handed an India debut against Australia in 2010. He scored a duck and made no significant contributions for a while, as he continued to be the quintessential replacement player in the side. However, given the controversial axing of Virender Sehwag after the second Test, Dhawan was handed the desirable India Test cap to make his debut against the Australians in March 2013. He had a start that he wouldn't have imagined in his wildest dreams as he raced away to the fastest ever hundred on debut off just 85 balls, and was finally dismissed for a boundary-filled 187.

Dhawan had a purple patch in 2013, and continued his form in ODIs and emerging as the player of the tournament in the ICC Champions Trophy in June 2013. He blazed away to 363 runs in just five games, including two hundreds. When Australia toured India in October 2013, Dhawan was relentless in his pursuit of runs as he slammed a ton and two fifties, finishing with 284 runs in six matches. He continued his good run in the home series against West Indies as well, becoming the highest run-getter for India in the calendar year.

Dhawan had a dismal Test series against South Africa in 2013 and an even worse one in England in 2014, with a best of 37 in six innings, where his problems outside off were exposed, as he committed to the line of the ball too early, thereby ending up not accounting for the lateral movement and had a tendency of chasing the ball. He continued to struggle in Tests barring a rather scratchy 81 in the second innings of the Brisbane Test, Dhawan did not get any significant scores in the 2014-15 Border-Gavaskar Trophy. Due to his technical deficiencies, he forfeited his spot to Lokesh Rahul. However, in limited-overs cricket, where the pitches are true and all is rosy, Dhawan continued to prosper.

Against all odds, Dhawan started off the 2015 World Cup with a fluent 72 against arch-rivals Pakistan and a glorious and skillful 137 at the MCG against South Africa, looking like a different player and playing all kinds of shots against the likes of Morkel and Steyn, helping his side gain their first victory over South Africa in a World Cup encounter. The pace and bounce of the Australian pitches appeared to have undone Dhawan, but the true bounce and the lack of lateral movement meant that he could get into his zone and start to play close to his body again ending the tournament with 412 runs. Dhawan and Rohit managed to set the platform every time for three hundred-plus totals with their solid first-wicket partnerships.

Dhawan has struggled for form in the longer format, with some small chinks in his armour such as the tendency of poking outside off and playing beside the line of the ball at all times rather than over it. Some of the virtues that work for him in the limited form, such as playing close to his body, do not work for him in the longer format because of the parallax error that he undergoes since he doesn't get his eyes over the ball while playing it the moving ball.

However, Dhawan continued to remain India's go-to man in ODIs and delivered another fine performance in an ICC event, making him a specialist for the biggest stage in the limited-overs format. Despite his limitations, his carefree attitude and his explosive off-side shots, one can't help but draw comparisons with another maverick opener from Delhi. The ability to peak during ICC events makes him an almost indispensable asset to the side in limited -overs cricket - a rather theatrical oddity in his career with the utopian twist of opportune comebacks.

The Indian Premier League came exactly at the right time in Shikhar Dhawan's cricket career. He wasn't quite the star back then in 2008 but his credentials as a cricketer was good enough to earn him an IPL contract. Dhawan was picked up by Delhi Daredevils and he played in a star-studded team alongside Sehwag, Gambhir, de Villiers, Dilshan, and Collingwood in 2008. Shikhar batted at the vital number-3 spot and ended up as the third highest run-getter with 340 runs in 14 matches.

In a bizarre decision, Delhi let Shikhar go to Mumbai in the next season. And the move to Mumbai Indians proved to be a disaster for Dhawan. In two seasons for MI, Shikhar only played 15 matches. In 2009, he played 5 matches and averaged 10 and in the next edition, he could only make 191 runs in 10 matches. After two dismal seasons, Dhawan moved to Deccan Chargers and that decision transformed Shikhar's career, he found back his consistency and became one of the key assets for Deccan Chargers first and then for Sunrisers Hyderabad. Soon, he was selected for the Indian team and since then he has been one of the top performers for India as well as for his IPL franchise.

Ahead of the 2019 IPL auctions, Shikhar was traded by Sunrisers Hyderabad. They sold him to Delhi and in return got Vijay Shankar, Abhishek Sharma, and Shahbaz Nadeem. So, after a gap of 11 years, Shikhar will represent the Delhi franchise again, not Daredevils but Delhi Capitals.

World Cup through the years
The Ultimate ICC event player. Shikhar Dhawan is the individual equivalent of the Australian team post the 1999 World Cup - regardless of merit or form, he has a knack of attaining his peak form just before World events. Ahead of the 2019 World Cup, things are no different. After a couple of months where he just about managed to hold on to his place in the side, Dhawan was in explosive form during his side's admirable IPL 2019 campaign, ending up as his side's highest run-scorer in the tournament just ahead of the World Cup. In India's 2015 World Cup campaign, Dhawan was India's highest run-getter with 412 runs, scoring at an average in excess of 50, with two crucial knocks in pressure games against major teams - 137 against South Africa, and a useful 73 against Pakistan. With the 2019 World Cup around the corner, Dhawan, who has consistently performed in ICC events, starting from the Junior World Cup in 2004, until the ICC Champions Trophy in 2017, is bound to be an asset to the Indian team in the 2019 World Cup and possibly a key player in their set-up at the top of the order to lay the foundation for a third title.