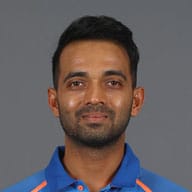 From the Dombivli suburb of Mumbai, Ajinkya Rahane was born to middle-class parents, who fully supported his passion for cricket. Due to lack of resources, Rahane had his initiation on a matted wicket in Dombivli, and started to to train with Pravin Amre at the age of 17. Rahane, the squeaky clean kid, took to cricket as if it were a religion and rose through the ranks of junior cricket and into the Ranji fold. In Ranji Trophy too, he excelled and, plundering 1089 runs in his second season and started to knock on the selectors' doors. However, the great Indian batting order had no space for the young cricketer, and Rahane continued to cruise through Ranji seasons, rupturing old records and churning out centuries day in and day out.

Rahane's came out on top in his first encounter with international bowlers, easing his way to a 172 in a Duleep Trophy encounter against the likes of England internationals like Liam Plunkett and Graham Onions. Rahane then delivered a critical performance of undeniable prowess when he hammered two hundreds in the emerging players' tournament in Australia, proving his worth in adverse conditions, and reminded observers of the game of another teen-aged Mumbaikar, with a similarly punchy technique, who had taken a special liking to Australian pitches in 1992...

After his peerless performance in Australia, he was well and truly in the national reckoning. It couldn't have been timed better; in August 2011, the Indian limited overs side found itself in desperate circumstances after conceding the Test series 0-4 in England. With several players undergoing lack of form and ailing from injuries, Rahane was flown in for the T20Is against England. He responded immediately as a stand-in opener with a fluent 61 on T20I debut and 40 on ODI debut, showing that adaptability was definitely a virtue that he could be entrusted with. A compact technique was the call of the hour and he definitely had the skills to encounter the late movement, as opposed to several of his technically-inferior compatriots. However, he soon started a bench-warming spree that would last a few months after the regulars returned for the home season.

Following the retirement of stalwarts like VVS Laxman and Rahul Dravid, the Indian selectors started the process of blooding the youngsters for the big stage. After a year in and out of the team, and 16 months on the bench, an injury to Shikhar Dhawan finally got Rahane the most desirable piece of attire in Indian cricket – Test cap number 278.

After a poor outing on Test debut, Rahane marked the beginning becoming India's most versatile and most needed player - their saviour in foreign conditions. On Boxing Day 2013, walked into Kingsmead at 199-4. Amidst a late-order collapse, he batted with the tail to end up on 51*, having countered a fiery Dale Steyn, Morne Morkel and Vernon Philander on a tricky surface to stretch the first-innings total to 334. In the second innings, with India reeling at 71-4, still trailing by 95 runs, Rahane scored a fluent 96 in a lone effort to rescue his team and emancipate them from their drought of away victories. He ensured that South Africa batted again, but only managed to stretch the lead to 58. India went on to lose the match, and the series, but they had unearthed a gem of an overseas player.

His technical nous, balance at the crease, and his compact technique were exemplary as he effortlessly checked his drives and played late without the wristy bottom-hand drive - a virtue lacking in most subcontinental batsmen of the generation. He had a pronounced forward movement and a front-on stance which was instrumental in making him a good short ball player - another skill most of his compatriots lacked.

Rahane went on to become India's most accomplished batsman overseas (along with Murali Vijay) throughout India's away season in 2013/14. After missing out in Durban, he scored his maiden hundred in Wellington on the tour to New Zealand on a seaming surface. On a garden of a seaming track in Lord's, he paved the way for India's first Lord's victory in 28 years (and their first major overseas win since Perth 2008) with a composed 103, getting himself on the honours board in the process. Later in the series, he continued to look the most technically-skilled batsman amongst his teammates - the rock that survived the English storm in the last three Tests. He ended the year with a magnificent 147 on a bouncy MCG strip during the Boxing Day Test against Australia, stitching together a 262-run partnership with Virat Kohli. This, on the back of an 81 on a seaming track at the Gabba, reinforced his reputation as the rock in the Indian middle-order.

After his hundred at Kingston in August 2016, Rahane now had a hundred in every Test-playing nation he had played in, except South Africa where he had a 96, and Bangladesh where he had a 98. However, despite being having an unrivaled away record relative to his peers, Rahane had a surprisingly poor record at home. He put all the naysayers to rest by stroking his way to two hundreds in the Delhi Test against South Africa in 2015, wrapping up a dominating win in the series against the Proteas.

Despite being a vital cog in the Test line-up, Rahane continues to go in and out of the ODI side. He did, however, do well enough to be given a ticket to the 2015 World Cup in Australia, where he performed admirably in the middle-order, playing a vital knock of 79 against South Africa in India's maiden World Cup win against them. However, he was dropped from the side on account of having a high dot-ball percentage late in 2015, and has since become a Test specialist for India. He does continue to get chances in ODIs as an injury-replacement, and has grabbed them with both hands. He was the highest run-getter in the ODIs in the West Indies in mid-2017; however, with the return of Rohit Sharma, Rahane was out of the ODI side again, owing to the lack of spots in the side and the established opening pair for Shikhar Dhawan and Rohit Sharma. However, he continues to be a vital batsman for the IPL franchises he has represented, including the Mumbai Indians, Rajasthan Royals, and Rising Pune Supergiant, the latter being his current IPL side.

Rahane saw a bit of a dip in form during the Ranji Trophy season of 2017/18, as Mumbai uncharacteristically failed to get past the quarter-final stages, scoring his first duck in Ranji cricket since 2008. His run of poor form lasted alarmingly long as he failed to make any significant contribution in the home series against a scarcely competent Sri Lankan bowling line-up. Nevertheless, he remains an indispensable asset in foreign conditions and has unsurprisingly retained his spot for India's first major away tour since December 2014, putting into perspective his technical skill and versatility.

Regardless of his performance in South Africa, Rahane has proved that he has grown in terms of maturity as well as skill during his time with the Indian team. In an era when power and pizzazz are the norm, Ajinkya Rahane, incredibly, is the maverick: arguably India's most complete batsman in the post-Tendulkar era.

In the initial years, Ajinkya Rahane played for his native franchise, the Mumbai Indians. As he was a rookie uncapped player at that point, not many opportunities arrived and it was not until his shift to Rajasthan Royals that Rahane started to show consistency in the IPL. A steady opener who can find the gaps in the Powerplay and consolidate thereafter, he became one of the vital cogs around which the Royals batting revolved. The 2012 season was his breakthrough year in the tournament, amassing over 550 runs at a healthy strike rate, including his maiden IPL century. In fact, the years 2012-16 saw Rahane cementing his position as one of the most consistent performers in the tournament’s history.

Over the last couple of years, things have fizzled a bit for the Mumbaikar. The 2017 season saw him struggle throughout the tournament, resulting in his worst-ever tally since 2014 as a senior cricketer. The story was pretty similar in 2018 too, with the burden of captaincy further proving difficult for Rahane to handle. He opened the innings for a major part of the tournament but with his form a concern, he even shifted to number three to allow the more aggressive Rahul Tripathi to partner Jos Buttler at the top.

A performing Rahane is crucial for Rajasthan due to the stability and calmness he provides to the dugout. His strike rates aren’t always the greatest and hence, a dip in form only complicates the problem for Rahane. Despite his demotion to number three at the fag end of the tournament in 2018, he is expected to start the 2019 season as the opening partner for Buttler. The last two seasons have produced a cumulative number of only three fifties from Rahane – a staggering stat which shows his poor run of form. He will be keen to make amends in this season.