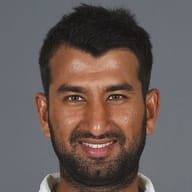 It was only a few years down the line that we came across small newspaper segments about the same boy with a squarer jawline and denser facial hair going by the name of Cheteshwar Pujara, scoring double-hundreds for breakfast and triple-hundreds for dinner at the Ranji level. After several years of being scoffed at for making runs on a flat Rajkot wicket, Cheteshwar Pujara started to seep into the minds of the selectors. In the minds of the India public, we had already found the natural successor to Rahul Dravid.

Armed with an atavistic batting methodology and mindset, Pujara brings the best of both worlds to the table. His focus on the longer format is a much-needed change in the current set-up of world cricket, where instant glory and quick money in franchise-based leagues is slowly taking over from an era when Ranji trophy performance was paramount. His comparison to Rahul Dravid, however, is more to do with his dogged mindset than his technique.

A phlegmatic and determined batsman, his technique is surprisingly bottom-handed, dependent on running his wrists through the ball, rather than punching it with his fore-arms. However, because of his straight-batted technique (coming down from first slip rather than gully), and his relatively young hands, he has managed to make it work by playing late and very close to his body.

Cheteshwar Pujara got his inevitable national call-up in the home series against Australia in 2010. After an unplayable grubber pinned him LBW in the first innings, he walked out to bat in the number 3 position in the second-innings, instead of his 'predecessor' Rahul Dravid, and made a fluent 72 on a tricky 4th innings run-chase on a dry and turning wicket in Bangalore, becoming the fifth Indian to score a 4th innings half-century on debut. Pujara was subsequently picked for the South Africa tour of 2010/11 and played in the 2nd and 3rd Tests. He didn't make any significant contributions, but made it clear that he had the grit to stay out there with the senior batsmen. He showed improvement while playing in the second of his two Tests, standing up tall to play Morkel and opening up his stance. However, a knee injury during the 2011 IPL ruled him out of contention for the Australia and England tours later that year.

He made a full recovery and made a comeback in the home season that followed. He wasted no time and accumulated a fluent 206* against England in the Ahmedabad Test and followed it up with a 135 in the Mumbai Test, fighting a lone battle while the other batsmen made playing spin seem like an alien skill. Pujara had finally gained momentum in Test cricket - a format he seemed destined for.

He continued to milk any bowling attack at home, continuing his penchant for 'Daddy hundreds' with a 204 against Australia in Hyderabad, and made a remarkable 4th innings 82* while opening in the Delhi Test to close out a run-chase. He seemed to be batting on a different wicket as his partners failed around him, as he helped India return the favour and seal a 4-0 whitewash against Australia at home.

Pujara's feats on his home turf were indisputable, but he did not have the weight of 'away' runs behind him to be termed a 'versatile' cricketer. He silenced all the cynics by showing dogged resistance on a seaming track and then going onto score a 153 in the first Test at the Wanderers against South Africa. The gritty batsman followed it up with a fifty in the succeeding Durban Test, against a supreme attack consisting of Dale Steyn, Morne Morkel and Vernon Philander, confirming that he was no one-Test wonder. He couldn't replicate his score on the tour to New Zealand in 2014, but continued to show unerring grit and focus against some quality fast bowling, and continuing to do his job of blunting out the new ball.

With the rather large shoes of Rahul Dravid to fill, a poor run of form in England and Australia in 2014 saw Pujara lose favour with the selectors and he controversially lost his place in the Test side. He didn't look technically inept; in fact, he did the difficult part of the job by playing out the new ball and the seaming ball, paving the way for the middle-order to score – case in point, Ajinkya Rahane's memorable 103 at Lord's, thanks to a not-so-memorable 117-ball 28 by Pujara to play out the first session on a minefield of a track. Nonetheless, modern cricket is a game of numbers, and as a result, Pujara was subsequently dropped.

He continued to work on his game, however, and remained in the reckoning for a national comeback. He made the most of an injury set-back to Murali Vijay in the 2015 series in Sri Lanka, reminding the selectors of his mettle by carrying his bat through his epic unbeaten 145 on an uncharacteristically seaming wicket at the SSC, Colombo, paving the way for an Indian win in the decider. Pujara has raised the bar even further since then, hammering routine hundreds during India's long home season and the odd series in Sri Lanka and West Indies.

He has showcased his versatility in the limited overs formats too, scoring 346 runs at a stunning average of 116 in the 2006 Under-19 World Cup, ending up as the highest run-getter. He signed a contract with the Kolkata Knight Riders in the Indian Premier League in 2008, and moved to Royal Challengers Bangalore for the 2011 season. However, due to lack of performances against the white ball and his reputation as an exclusive Test player, he was never given an extended run in the Indian ODI fold. Nevertheless, given the densely-packed cricket calendar, Pujara took Robert Frost's 'road less traveled' and continued to focus on his forte – Test cricket, even having a stint in the county circuit to improve his technique against the Dukes ball in England's distinctive seaming conditions.

Pujara is one of the modern rebels, in that he is a cricketing purist. His technique isn't the prettiest. The charm of his batting lies in the nostalgia of the years gone by: The survival instinct off a home-made technique containing all the essentials of batting, done his own way under the watchful eye of his father Arvind Pujara. Despite all the ridicule against the gigantic hundreds on Rajkot belters, the Pujaras persevered and reaped their rewards. At a higher level, when Pujara was dropped for the Gros Islet Test in 2016 for having a low strike-rate, Virat Kohli's exposure and struggle against the new ball raised a much-needed alarm and reminded the dressing room about the importance of Cheteshwar Pujara. He went on to score 1140 runs in the 2017 calendar year, having played 2 innings less than Steven Smith who finished top of the table.

All the scoffing naysayers have seen the truth: Cheteshwar Pujara is built on cricketing merit; spending more time in the nets than in the gym, focusing on a tailor-made cricket body rather than a beach body. With a lengthy away season coming up, Pujara will be a key player if India are to achieve success in overseas conditions, as he continues to do the thankless job of guarding the middle-order against the new ball. With a more mature head on his shoulders and a tweaked technique, it would come as a surprise to no one if he scored runs by the barrel.

A humble man, Pujara himself summed up his role in the side: 'When you're playing Test cricket for your country, you can't just play your natural game. You play the circumstances.' That, right there, is Cheteshwar Pujara for you in a nutshell – Team first, self later.