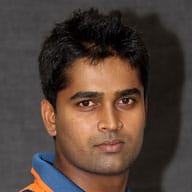 Vinay made his Ranji Trophy debut for Karnataka in the 2004-05 season and quickly rose through the ranks to become their lead seamer. The 2007-08 season marked his arrival as he finished as the second leading wicket-taker in the Ranji Trophy season - a performance that ensured a call-up to the IPL where he represented Royal Challengers Bangalore. It soon got better as the 2009-10 Ranji Trophy season saw him take 46 wickets and lead his Karnataka side to the final. He formed a three-pronged pace attack, sharing the ball with Mithun and Sreenath Aravind who flowered under his guidance.

That showing ensured an India call-up - he was chosen to play in the T20 WC in the Caribbean in 2010. When the new auction took place in 2011, he was picked up by Kochi Tuskers Kerala for US$475,000. He performed well during the 2011 IPL and he was picked to tour the West Indies for the ODI series. Later in the 2011/2012 season, he was named in India's Test squad for the first time as a replacement for the injured Varun Aaron. He made his Test debut in the third of the four-match series in Perth and picked up only one wicket giving away 73 runs. However, his listless performance in that debut Test was ignored as he secured a whopping USD 1 million dollar contract with Royal Challengers Bangalore in IPL-5 2012. He was RCB's leading wicket-taker for two consecutive seasons bagging 19 wickets in 2012 and 23 in IPL-6 2013.

When Australia toured India in October/November 2013, Vinay picked up 8 wickets in 5 games and was slammed for his performance as he was expensive in the death overs. He was then dropped from the squad for the West Indies and South Africa ODI tours in November and December 2013.

However, he continued to lead his side Karnataka in the Ranji Trophy and eventually won them their 7th title. He lead from the front bagging 29 wickets to become the leading wicket-taker of the side and also made handy contributions with the bat including a fine unbeaten hundred. He a very good outing in the Vijay Hazare trophy as well, picking up 28 wickets to top the bowling charts for his side Karnataka alongside some useful hits with the bat. Impressed by his show in the domestic circuit, Vinay was bagged by the Kolkata Knight Riders for 2.8 crore in the 2014 IPL auctions.

His standout performance of the season was when he defended 9 runs off his final over carrying KKR to an improbable win against RCB. And the icing on the cake was Kolkata being crowed as the champions. Vinay literally swept all the titles in that particular year. The lady luck followed him in the domestic season too as Karnataka continued their merry run and made history by pocketing the famous treble (Ranji, Vijay Hazare, and Syed Mushtaq Ali titles) for the second consecutive year under Vinay's leadership. Mumbai Indians acquired him from Kolkata Knight Riders in 2015 and despite playing a limited number of matches, Vinay's presence turned out to be auspicious for MI as they bagged their second IPL trophy.

After 2-3 unforgettable years, the purple patch came to a halt as Vinay's stocks plummeted in the next few seasons in the domestic circuit and critics raised eye-brows over his captaincy as well. Karnataka's inability to cross the finish-line on multiple occasions in the Ranji knock-outs saw Vinay passing on the baton to Manish Pandey and in 2019, after leading his team - Hubli Tigers - to their maiden KPL title and serving the state selflessly for close to 15 years, Vinay Kumar decided his time had come to move out of Karnataka and hence, he migrated to Puducherry.
Top Live News: