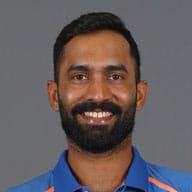 Having risen through the ranks in age-group cricket, Karthik started to make the selectors' shortlist after a string of centuries in the 2002/03 season for the Tamil Nadu Under-19 side. The runs faded away towards the end of the season, but the selectors decided to give him the benefit of the doubt and he was summoned into the national side after Parthiv Patel was axed due to his unreliable glovework.

Karthik immediately caught the public eye when he debuted for India in ODIs as a 19-year-old in late 2004. The blurry image of an airborne Karthik flying horizontally to stump Michael Vaughan at Lord's has been etched into the mental timelines of contemporary Indian cricket aficionados ever since.

He was handed a Test debut on a minefield of a track in Mumbai in late 2004 against Australia. However, a string of low scores made way for other keeper-batsmen in the fringes. After the emergence of Mahendra Singh Dhoni, Karthik has made comebacks into the side as a pure batsman but failed to topple over Dhoni for the wicketkeeping position. The highest point in his career arrived when Karthik, replaced Sehwag in the 2007 tour of England as an opener. Showing a stoic, airtight technique in unfavorable conditions, he ended the Test series as India's highest run-getter, ahead of some big names like Rahul Dravid, Sourav Ganguly, and Sachin Tendulkar, playing a significant role in handing India an elusive away series win.

Karthik's keeping, though, needed a lot of work; it was a flaw that had led to his axing from the Tamil Nadu side as well. However, a specialized training camp in the off-season under former Indian keeper Kiran More helped him refine his technique and as a result, he came back a more technically accomplished and confident wicketkeeper. He made a comeback to the side in 2006 after Dhoni was rested, and later earned a spot as a pure batsman following the poor batting form of some of the other Indian players. However, he had another dip in form and Virender Sehwag's return to form meant Karthik was out of the playing XI again.

With an established opening combination and Dhoni already set in the team, Karthik's chances were scarce. However, he made a mess of the opportunities he did get with an abominable display of wicketkeeping in the Sri Lanka Tests in 2008, as he lost his place to Parthiv Patel for the final Test of the series.

He did reasonably well in India's unbeaten Champions Trophy campaign in 2013, starting off with two centuries in the warm-up matches and continuing his good run in the limited opportunities he got during the tournament. It was all too good to last, though, as Karthik went through another familiar dip in form and lost his place in the side. He found some touch early in 2014 and when MS Dhoni pulled out of the 2014 Asia Cup, Karthik got the nod and he played in the middle order.

Karthik has perhaps missed out on playing at the highest level during his peak, as have several other keepers in the Dhoni era. The opening finally came after the retirement of Dhoni from Tests in late 2014, but Wriddhiman Saha was picked ahead of him. With Saha turning out to be nearly flawless behind the stumps and gritty with the willow, Karthik's might have missed the bus with the whites, but his batting ability has kept him at the brink of the Indian ODI side. His performance at the domestic level remains consistent and he continues to be the quintessential replacement player for India; one who hasn't quite been able to churn out enough performances consistently to carve out his own identity at the highest level, but has been a useful stand-in when picked.

IPL through the years:

Dinesh Karthik's struggle to break from the fringes did not have any bearing on his IPL career as he was picked for the inaugural edition of the IPL by Delhi Daredevils for approximately 2.4 crores (525,000 USD). However, Karthik did not do enough justice to his talent as he mustered only 145 runs from 8 innings. DD though managed to enter the semis. After two more years at the Delhi franchise, Karthik made the move to Kings XI Punjab for the 2011 edition.

A whopping amount of 900,000 USD was paid to bargain the services of Dinesh Karthik by the Punjab franchise. But 282 runs from 13 innings wasn't enough for Punjab to make the cut into the play-offs. This led to a transfer for the next season and Mumbai Indians purchased him for a mind boggling 12.5 crores.

Year 2013 was Dinesh's water-shed year as he smacked 510 runs from 19 innings in Mumbai's victorious campaign. But even that was not enough for Mumbai to retain their designated number 3 for that edition.

The next three season saw Dinesh Karthik's shares in IPL scaling a see-saw pattern. In 2014, DD bought his services for 10.5 crores and 2015 saw RCB pocketing him for an unreal 12.5 crores. But the runs didn't come that fluently and his stocks fell. 2016 saw him playing for a fourth different team in four years in the form of the then newly formed Gujarat Lions.

But 2018 bought good news and great form for the Tamil Nadu man as he was chosen to lead KKR and was bought at 7.4 crores ahead of the 2018 IPL. Karthik took upon the role of a finisher for his side and did justice to it with some solid scores down the order.

However, the finisher didn't do the job in the play-offs and KKR failed to make it to the final.

World Cup through the years
Dinesh Karthik has been in the Indian ODI circuit since before MS Dhoni. After his athletic stumping of Michael Vaughan did the rounds of Youtube, Karthik disappeared from the ODI scene after the arrival of Dhoni, and despite being around for 3 World Cups (2007, 2011, and 2015), he has never been included in the squad for a World Cup. In general, it has been the lack of consistency that has slowed him down over the years. However, in the wake of Dhoni's exclusively sheet-anchor approach over the last few years, India has needed a pinch-hitter who could start hitting the ball from ball 1 - enter, Mr. Dinesh Karthik, who has been picked in the Indian batting order to hit it big in the lower order, along with Hardik Pandya and provide the Indian total some impetus towards the end of the innings. Unfortunately, he is unlikely to be in the starting XI, but he would certainly be experienced enough to take the opportunities when they present themselves, given that 2019 could possibly be his final World Cup, at the age of 33. In addition, he is also likely to fill in for MS Dhoni as a substitute wicketkeeper.
Top Live News: