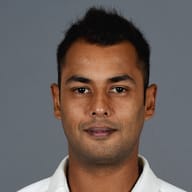 Batting Statistics
Batting Statistics for Stuart Binny. Profile Updated On 06 Saturday June 2020 111515000000
Bowling Statistics
Bowling Statistics for Stuart Binny. Profile Updated On 06 Saturday June 2020 111515000000
Profile
Profile for Stuart Binny. Profile Updated On 06 Saturday June 2020 111515000000
India's desperation for a genuine pace bowling all-rounder since the legendary Kapil Dev's retirement saw quite a few bits and pieces cricketers getting games. Stuart Binny falls in that category - a medium pacer who could swing the ball in favourable conditions and a batsman capable of hitting the long ball. However, like many before him in this list, Binny also wasn't much of a success on the international stage despite putting in strong performances on the domestic circuit. It was the 2013 IPL that catapulted Binny's cause as he showcased his utility skills in the showpiece T20 tournament. Although it was expected that he would feature in white-ball cricket, Binny even got a handful of Tests, even putting in a match-saving fifty at Nottingham in 2014.

However, there was never really a spark in Binny's performances, save his record-breaking figures of 6/4 against Bangladesh which remains the best figures by an Indian bowler in ODIs. It was evident that Binny was more of a workhorse cricketer with limitations. The main issue though, like it was many of the all-rounders before him, was the fact that they weren't specializing in any particular department. Binny couldn't be selected as a pure batsman or a bowler alone - a quality which was a must for a genuine all-rounder. Nevertheless, India were needing players with multiple skills and he got the nod for a while before being axed.

Thus, as far as a national call up is concerned, the chances are more or less done and dusted for Binny. The fact that he is in his 30s now doesn't help his cause and also the emergence of young all-rounders like Hardik Pandya and more recently, Vijay Shankar has meant that Binny has been out of the reckoning. Nevertheless, he continues to be an important figure in domestic cricket and can also be counted as a valuable commodity in the IPL. In 2018, injuries coupled by poor form haunted Binny which meant that he also fell off the radar of Karnataka's selectors. Having been pushed to the corner, the all-rounder ended his 16-year long association with Karnataka cricket and moved to Nagaland for the 2019-2020 season.

One of the giant all-rounders in India’s domestic circuit, Stuart Binny has been a prominent figure in the IPL as a hard-hitting all rounder who bowls medium pace. He’s been a part of multiple franchises although it’s with Rajasthan Royals that he has enjoyed most success. The Karnataka lad finally got a chance with his native franchise, the Royal Challengers Bangalore but it was a short-lived stint as he got
released at the fresh auctions in 2018. The Royals got back Binny in a bid to bolster their domestic strength.

Binny has never really had a standout IPL season bar the one in 2013 where he was extremely influential for the Rajasthan Royals down the order. Despite not producing a single half century, he averaged over 30 with close to 300 runs at a fantastic strike rate. That was the period when he also got into reckoning for the Indian team but over the years, his impact has reduced considerably. He still continues to be a
key figure in domestic cricket and the Karnataka Premier League last year showed that he still has some fuel left in the tank.