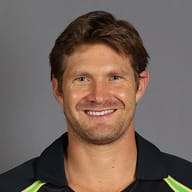 Watson made his international debut in 2002 during the tour of South Africa in the ODI series. Australia had just appointed Ricky Ponting as the skipper and also decided to make a selection overhaul of sorts. With their obsession for bits-and-pieces all-rounders, Watson was an obvious selection considering that he was more than just a utility all-rounder. However, fitness was a big issue for him, as it would turn out to be throughout his career. He had to battle his body more times than he had to deal with bad form and that's telling a lot. Despite all that, Watson had a fairly good international career, especially in limited-overs cricket where he truly shone.

The success in white-ball cricket gave Watson the chance in Tests in 2005 but injuries plagued him in a big way which meant that he had to wait till the 2008-09 season to play the format frequently. Like in ODIs, here also Watson started off as a middle order batsman before being pushed to the opening slot in the midst of a grueling Ashes series. He didn't struggle as many expected he would, instead started the new role with a flourish but that move to send him to the top in Tests was probably in hindsight a confidence-destroying move to his Test career. Although he had success in the initial phase as an opener, the bowlers then started sorting him out, particularly with the LBW trap due to his tendency to play around the front pad.

The latter stages of Watson's Test career was a blob as he huffed and puffed in the format. Nevertheless, he did play a few fine knocks as well although most of them got clouded by the dismal finish to his career. However, he was always a force to reckon with in the shorter formats. The T20 format was also his pet - he had exceptional success not only for Australia but also in the IPL where he became a household name due to his all-round skills. After the Ashes defeat in England in 2015, Watson decided to quit from Tests. He played the ODIs that followed but was dropped soon after and in 2016, decided to call it quits from all forms of cricket.

It won't be wrong to say that Watson hasn't always been talked about as much as he deserved to. He didn't have a lovable personality for that perhaps and his comical tryst with the DRS made him further unpopular as he would often make bizarre reviews against seemingly plumb LBW calls. But all the jokes apart, the fact is that he was a gun player for Australia in white-ball cricket, a real giant who could have done even better if he had better fitness. Post retirement, Watson has been having a gala time in the T20 leagues across the globe.

Watson made a grand entry into the IPL with a stellar opening season in 2008 for Rajasthan Royals. Not only was he the leading run-scorer for the side, he was also the third highest-wicket taker and played a crucial role in the Royals' success story. He missed the next season due to national duties and injury but continued to take part in the tournament from 2010. It was only from 2013 that he was fully into the IPL as he was a part of the Australian setup. He yet again topped the batting charts for the Royals in IPK-5 and also made his maiden IPL hundred, 101 against CSK.

The all-rounder led the Royals in 2014 but had a modest outing by his standards. He was back among the runs in 2015, but had to battle injuries and missed a few games. However, he went to make an unbeaten 104 against Kolkata Knight Riders that season. The Royals' two-year ban for the spot-fixing scandal meant Watson went into the auction pool and Royal Challengers Bangalore picked him up for 9.5 crore. Somehow, he couldn't justify his potential at RCB. While he picked as many as 20 wickets in 2016, he had a poor time with the bat and was not even a regular member of the team next season. This meant RCB released him and the returning Royals did not want to retain him as well.

CSK pouched him at the auctions and Watson stunned everyone with his blitz when the tournament began. He silenced critics who were opining that he didn't have the mettle to still be part of the IPL caravan by smashing a really handsome 555 runs in the season - his best in IPL history. While he was batting mostly in the middle-order at RCB, Dhoni gave the luxury of opening the batting and the Australian was in full flow and even tonked a couple of hundreds in the season.

His knock in the IPL final against Sunrisers Hyderabad was unbelievable to watch. He struggled to put bat on ball and failed to open his account after ten balls in a chase of 179. But, in a brilliant batting display, he completed a hundred in the next 40 balls to become the fourth player to score two-plus hundreds in IPL. The innings ensured that the Super Kings coasted to victory on their comeback. The 2019 season was underwhelming for Watson who still got backed throughout the tournament and his big-game abilities came to the fore in the final where he nearly repeated his 2018 heroics, with CSK falling just short.
Top Live News: