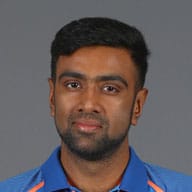 A consistent season at the domestic level made him stand out and got Ashwin a contract with the BCCI, in addition to leading Tamil Nadu to victory in the domestic one-day trophy in 2009. When Harbhajan opted out of the first two games against South Africa at home in early 2010, Ashwin was called in as his replacement. Alas he did not get his coveted India Test cap. Impressive performances for the Chennai franchise in the subsequent edition of the IPL meant that he was always knocking on the door and an extended chance arrived in June 2010 when India decided to experiment on their tour to Zimbabwe for a tri-series.

After going constantly in and out of the team, the wily off-spinner was picked in the Indian squad for the 2011 World Cup in the Indian subcontinent. However, he was played for only two games including the quarter-final and omitted for the final. Ashwin has been consistent in the opportunities that he has got so far and has taken over as the lead spinner in the Test side after the selectors dropped Harbhajan for the Test series against West Indies in 2011. He formed a successful partnership with left-arm spinner Pragyan Ojha, especially in Tests in India.

Ashwin was finally given an extended Test run and was adjudged the Man of the Series in the Border-Gavaskar Trophy in 2013, starting his journey as India's go-to bowler on subcontinental pitches with impressive tally of 29 wickets in the series. In the process he became the third Indian off-spinner to take 25-plus wickets in a series after Harbhajan Singh (32) & Erapalli Prasanna (26). In the first Test match of the home series against West Indies in November 2013, Ashwin got his second Test ton and also put on a record seventh wicket partnership of 280 runs along with Rohit Sharma, going on to get his 100th wicket in his 18th Test - another record.

Due to the largely home-centric season since 2015 to 2017, Ashwin has consistently performed well, making use of his guile and deception more along with his stock deliveries, rather than experimenting with too many vairations. He had finally become a secure enough bowler to trust his off-break and his floater as his stock deliveries and using the carrom ball and other variations sparingly. In overseas conditions, however, he has quite a contrasting and abysmal record and has struggled to grip the Kookaburra and extract as much turn on foreign pitches, compared to the SG ball in India. He showed his growth with the Kookaburra on helpful surfaces on the tour of Sri Lanka, where he claimed 21 wickets and played a big hand in India's series win, their first in the island nation since 1993. In the subsequent home season, he continued to mint wickets, looting 31 in 4 home Tests against South Africa.

Ashwin played the last two Test matches of the England tour and didn't perform too well with the Dukes whereas his counterpart Moeen performed considerably well against a formidable Indian batting line-up. He also played three Tests in the 2014-15 Border Gavaskar Trophy and showed much better control with the Kookaburra despite not being able to enchant it he did the SG in India. He had outstanding series against the West Indies, New Zealand and England at home snaffling an unparalleled 72 scalps in just 12 Tests. Ashwin had now turned into a complete all-rounder, more-than-handy with the bat and devastating with the ball in familiar conditions. He earned himself the prestigious ICC Test player of the year award as well as the ICC Player of the year award becoming only the second Indian to achieve both in the same year after Rahul Dravid. After missing out on the IPL, Ashwin went to England to have a county stint and proved to be excellent with the Dukes ball on the allotted surfaces, picking up wickets as though he were bowling in Chennai. During the second Test against Sri Lanka at Nagpur, he became the fastest bowler to 300 Test wickets in his 54th Test, leaving behind Dennis Lillee (56 Tests) and inspiring India's joint-highest Test win by an innings and 239 runs.

However, his performance abroad leaves a lot to be desired, and since India hasn't played a proper away tour since December 2014 against Australia, Ashwin hasn't had the opportunity to prove himself in alien conditions again. He has nothing to prove in the subcontinent as he continues to torment the best in the world in his backyard. However, in conditions less conducive to turn, where the margin for error is less and the effort required to turn the ball is more (especially for a finger-spinner), Ashwin has a point to prove. His performance in South Africa in early 2018 should give us an indication as to how much Ashwin has really improved - and this might well be the platform on which he needs to impress to make his ascent from being excellent to an all-time great. Another huge opportunity for him will be the leadership role in the IPL where he shall be captaining Kings XI Punjab from 2018-2020.

IPL - Through the years

A rookie from Tamil Nadu, Ravichandran Ashwin, was picked by his home franchise - Chennai Super Kings - in 2009, where he played just two matches. The following season (2010) saw him rise to fame - courtesy his 'sodukku ball' a.k.a. carrom ball. Under MS Dhoni's captaincy, the 'mystery spinner' was summoned to bowl with the new ball and the youngster didn't disappoint his skipper as he finished with 13 wickets at a miserly economy rate of 6.10. Despite heavy competition from Royal Challengers Bangalore, the Super Kings managed to re-buy him for the 2011 season and the offie proved his worth. Ashwin scalped 20 wickets (economy: 6.15, average: 19.40) and he went onto win back-to-back titles for CSK (2010 and 2011). An integral member of the Super Kings set-up, he was retained by the franchise ahead of the 2014 season.

While 2014 saw him lose his form a bit, Ashwin came back strongly in the following season. Although he picked just 10 wickets in 16 games during the 2015 season, his economy rate was 5.84, which is incredible in T20s. Following the 2-year-suspension for CSK, Ashwin was picked by Rising Pune Supergiants at the 2016 IPL Player Draft. After having an ordinary outing in 2016, Ashwin was ruled out of the following season due to sports hernia injury. Ashwin had to go under the hammer in 2018 and Kings XI Punjab bought him for Rs 7.6 crore and named him the captain. Ashwin has never been afraid to experiment new things on a cricket field. He showed his astuteness in his maiden stint as IPL captain, but at times tried to be too cheeky. Following the omission from white-ball internationals, Ashwin will be keen to prove a point in IPL 2019 as KXIP eye a maiden IPL title.