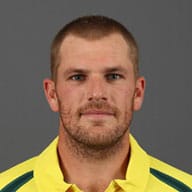 The season saw him scoring his maiden First-Class century when he scored 102 against Tasmania. He sealed his spot in Victoria Bushrangers' middle-order and starred in their title win. His performance in the season earned him a spot in the Rajasthan IPL franchise, where he got just one game.

Finch's reputation as a power-hitter grew in the Champions League T20 tournament in South Africa in 2010. He smashed 41 off just 17 balls against eventual champions Chennai and also scored a match-winning fifty, later on in the tournament. The performance helped him win a contract with Delhi for the 2011 IPL season, where he was picked for US 300,000.

Finch also represented Australia in two T20I matches against the visiting English team in 2011. He justified his selection with a blistering 53 off 33 balls at the MCG in his second game to bag the Man of the Match award and also helped Australia square the series.

He then started to score consistently and nowadays, he is almost a certainty in Australia's limited overs sides. Finch grabbed eye-balls in 2013 when he smashed England all over the park in a T20I on his way to a sensational 63-ball 156, the highest individual score in that format. He continued his good form and scored heavily in the shortest format, forming a formidable opening combination with David Warner. He also played the 2014 T20 WC and did fairly well.

The right-hander, got his first opportunity in the ODI format in early 2013 against Sri Lanka and has been a regular member of the side since then. He also scored a couple of fifties in India before notching up two hundreds against England after The 2013-14 Ashes series.

Finch had a good tri-series in Zimbabwe, scoring two fifties and a hundred. Although, he failed to do well against Pakistan in UAE, he improved his game for the home ODI series against South Africa, where he was against amongst the runs once again. Eventually, a healthy average of close to 40 gave him a place in Australia's squad for the 2015 World Cup.

Finch was a part of the Mumbai Indians squad in the 2015 IPL. However, he was ruled out of the tournament after tearing his left hamstring.

Interesting fact: Finch was banned from the national academy in 2007 for not keeping his room clean.

Post recovery, Finch had a great ODI tour in England in which he pummeled 2 fifties in 3 games. Surprisingly, Australia played only one T20I in 2015 in which Finch (the then Australian T20I skipper) didn't feature citing a hamstring injury. He did impress in the home series (ODIs and T20Is) against India but yet again pulled his hammy during the second T20I only to be ruled out of the tournament. To aggravate matters, Finch was axed as Australia's T20I captain weeks before the mega event (Icc T20 WC 2016). Although the Victorian recovered in time and came in as the number one T20I batsman, he struggled to find a spot in the playing XI for the first 2 games. Australian team management faced severe criticism for dropping such a quality opening batsman. Finch, however, was the part of the final 2 games in which he couldn't make much impact. Eventually, Australia failed to claim a spot in the semis.

A few experts believed that he can make an impact in the Australian Test side if and when he works on his feet movement. Finchy, though, continues to be one of the valuable players going around in the shortest format of the game. He has already featured in 5 IPL teams (Delhi Daredevils, Rajasthan Royals, Pune Warriors, Sunrisers Hyderabad and Mumbai Indians) and was a part of Gujarat Lions' squad for the 9th edition of the cash-rich (IPL) league and featured in the 10th edition of the tournament for the same side as Gujarat decided to retain him for the season.

2018 was a massive year for Finch as he ended up getting the limited-overs captaincy of the Australian team and also got his Test debut. With Steve Smith and David Warner serving bans, a change was inevitable and although Test skipper Tim Paine got the opportunity initially, it was obvious that the Aussies needed a captain who would merit a place in the XI, something Paine didn't.

Finch endured a form slump from late 2018 onward and with Australia also having a miserable year, things were getting complicated for the team as well as their captain. However, successive series wins over India and Pakistan, both in sub-continental conditions saw Finch's stocks as a captain shoot up. His personal form also improved drastically and with Warner-Smith back, Finch will lead a reasonably strong Australian side in the 2019 World Cup.

World Cup through the years
The 2019 World Cup will be Aaron Finch’s first as a captain and his second overall, after having been a part of Australia’s victorious campaign in 2015. He had a middling tournament back then, producing a fantastic century against England to begin with, before tapering off for the next few games. However, cometh the big stage, Finch was back to his best as he produced a hard-fought fifty in the semi-final against India. His partnership with Steve Smith was crucial to Australia’s chances in the game. With the added responsibility of leadership this time around, the onus is on Finch to lead from the front.