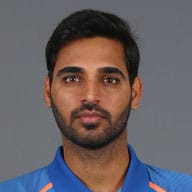 Bhuvneshwar Kumar, born in Meerut, the manufacturing home of the SG ball, shot into the limelight when he debuted on Christmas Day in 2012, making the white Kookaburra zip all around the Pakistani bats at the Chinnaswamy Stadium in Bengaluru. A demonstration of nagging swing bowling in the shortest format of the game in batting-friendly conditions was a fine way to make the world sit up and take notice of this precocious talent.

Having made the usually unresponsive white Kookaburra talk in a high-pressure game against Pakistan, and with a dearth of quality fast-bowling in the country, Bhuvneshwar was given the nod by the selectors for the Chennai Test against Australia in 2013. Bhuvneshwar was selected in the ODI squad for the Champions Trophy in 2013. He was later selected for the tri-nation tournament where he claimed career best figures of 4-8 against Sri Lanka. He was awarded the Man of the Series, having finished the series with the maximum number of wickets.

He continued to be a regular member of the side for the limited-overs format and toured South Africa and New Zealand without much success as he started to lose his craft in his quest to find pace. He did well in the Test series in England in 2014, finishing the series as the highest wicket-taker, and getting his name up in the Lord’s honors board, as the raised seam of the Dukes helped him achieved prodigious movement in the air against the famed English batting line-up. He also made relatively exceptional contributions with the bat, registering three fifties in the series. After the conclusion of the home series against West Indies in 2014, the selectors rested him for the Sri Lanka series. He returned to the national side for India's tour of Australia but did not feature in the first three Test matches due to an ankle injury.

Bhuvi was expected to perform well in the 2015 World Cup. However, his poor fitness did not allow him to be part of the playing eleven. He played only one game against UAE. His 2016 season was restricted to just four Tests. Bhuvneshwar left a mark - taking two five-wicket hauls, one each against West Indies and New Zealand.

His career, however, took a turn for the better once he worked on his fitness and started to swing the white Kookaburra at pace and by the Champions’ Trophy of 2017, he and Jasprit Bumrah were leading the Indian ODI pace attack with a new weapon in his armoury - the yorker. He had started to bowl well with the old ball, getting his yorkers right, and was no longer the new-ball specialist who would get bowled out in the first 20 overs. Having picked up the pace as well, he started to reverse-swing the ball as well and became a headache for batsmen the world over.

In the Test fold, despite being picked for more helpful conditions, he continued to be an injury-replacement or an experimentation choice for the captain. However, after developing a scrambled seam delivery in the home series against Australia, and getting the ball to jag off the seam as well as move in the air, he had expanded his repertoire enough to become an indispensable asset to the Indian Test team. Having tormented the visiting Sri Lankan side, and even having South Africa’s famed top-order at sea in their own backyard, the sky is the limit for Bhuvneshwar. Unfortunately, he got injured at a crucial juncture before the tour of England in mid-2018, and got sidelined; a major setback for an Indian side which was relying on his skilful and reliable swing bowling along with his newly-developed scrambled-seam variation which might have tuned out to be pivotal given the English conditions. Nevertheless, with age on his side, and with a perfect blend of brain and brawn, the best is yet to come from this twinkle-eyed wizard from Meerut.

SRH's go-to bowler at both ends of an innings. Be it picking up early wickets, or choking the opposition in death overs, Bhuvneshwar Kumar has done it all in the IPL. His baptism into the cash-rich league, wasn't quite as smooth though. After being picked as a rookie fast bowler ahead of the 2009 edition, Bhuvi didn't get any opportunities at the RCB in his first two years at the Franchise. Although he did play a lone game against Delhi Daredevils in 2009 Champions league, Bhuvi couldn't tick the wickets column and was subsequently overlooked in the shortest format.

In 2011, the then newest-franchise Pune Warriors signed him to be part of a relatively young side which included the likes of James Faulkner, Mitchell Marsh and Clauum Ferguson. Bhvi then became a constant in Pune Warriors' side and was one of the shining lights in an otherwise doomed franchise which ended up as one of the least successful sides in the history of IPL. Post the dissolution of Pune Warriors, SRH signed Bhuvi in 2014 and his growth in both international and IPL cricket became almost parallel as the lanky swing bowler continued to develop several variations to his game. He was one of the first players in IPL to use the knuckle ball to great advantage and those bundle of variations helped him clinch the Purple Cap (awarded for highest wicket-taker in the season) for two successive seasons, 2016 and 2017. With a slew of injuries upsetting his rhythm, Bhuvi couldn't replicate his success in the 2018 edition and missed a few crucial games for SRH.