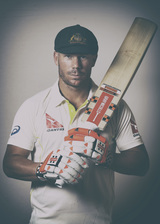 With T20 success, he made his ODI debut against the South Africans in Hobart. An aggressive 69 in just his second ODI seemed to confirm the rare talent of Warner. However, as the ODIs progressed, his form dipped and he was axed before forcing his way back into the side. He continued to impress in the T20 format of the game, and was one of the few bright spots during Australia's first round exit in the 2009 edition of the T20 WC in England.

With a slot opening up in the Australian Test squad, Warner was one among the many choices. Already a regular in the ODI line-up, Warner made his Test debut against New Zealand in the Australian summer of 2011. After a modest debut at the Gabba, Warner came into his own with a career-defining century in Hobart. He belied expectations and became the 13th Australian opener to carry his bat through an innings. If the knock in Hobart was full of grit and determination, he showed another side of his batting abilities when he blasted a listless Indian bowling attack to all parts of the WACA during a stunning career-best knock of 180.

Warner’s aggressive touch at the top of the order was in full flow once again when he creamed a superb 119 against a top notch South African attack at the Adelaide Oval in 2012. On 12th June 2013, Warner was dropped for Australia's second match in 2013 ICC Champions Trophy game against New Zealand for disciplinary reasons. It later emerged that he had tried to punch Joe Root. The event happened hours after Saturday's loss to England at Edgbaston. On 13th June 2013, the board announced that Warner was to be fined £7,000 (AU $11,500) and would not play for his country until the first Ashes Test on 10th July, 2013. Warner, subsequently, missed the rest of the 2013 ICC Champions Trophy and the tour matches against Somerset and Worcestershire.

A month later on 27th July 2013, while playing for Australia 'A' against South Africa 'A' in Pretoria, Warner was involved in an on-field altercation with South Africa 'A' wicket-keeper, Thami Tsolekile. This was deemed serious enough for the umpires to step in twice, however, no formal complaints were made. He scored 193 in that match and he was eventually forgiven and was drafted into the Australian side for the third Test against England. What followed was even more comical as he 'hooked' one to Root and was caught on the boundary.

In the Ashes series in Australia in 2013-14, he scored runs freely and emerged as the highest run-scorer. He scored 523 runs from five matches at an average of 58.11, which included two hundreds and two fifties. Despite his heroics, Delhi didn't retain him for the IPL season 2014 and he was later snapped up in the auctions in February 2014 by Hyderabad for a whopping amount of Rs 5.5 crores.

Warner bettered his own effort in The Ashes 2013-14 by once again becoming the highest run-getter in the three-match Test series against the No.1 ranked team South Africa. He scored a mind-blowing 543 runs from six innings at an average of 90.50, which included three hundreds, with two of those hundreds coming in the last Test. He was rightly declared as the Man of the Series.

Warner continued to do well in all formats and also scored a fine hundred in the first Test of Australia's UAE tour in 2014. He scored a fifty in the home ODI series against South Africa to stay in good shape and smashed three hundreds against India in the 2014-15 Border-Gavaskar Trophy to hurt the visitors badly. Warner was the second highest run-scorer for Australia in the 2015 World Cup. He amassed 345 runs in 8 games, which included a dashing 178 against Afghanistan, helping Australia to post 417 on board - the highest ever World Cup total.

Warner was named the captain of Sunrisers Hyderabad in the eighth edition of the IPL. Just like many of his colleagues, Warner had his share of problems against the swinging ball during 2015 Ashes in England. The stocky Aussie compiled some fighting knocks and was one among the top three run-getters for his side during the all-important series. The pocket-rocket though had an incredible home summer (2016) as he struck 3 successive centuries against the Kiwis and was fittingly adjudged Man of the Series.

He backed it up with 82-ball 100 against the Windies at the SCG in the Pink Test. What followed wasn't quite usual for Warner as he failed to repeat similar performances in New Zealand (both in Tests and ODIs). As if that wasn't enough, he was pushed down the order in T20Is which didn't work in his and the team favour. He had a miserable T20 WC (2016), but helped SRH win their maiden title in the IPL.

He's never far from controversy, but what happened on the 2018 tour to South Africa could unfortunately be how his career is remembered. On that fateful afternoon of 24th March in Cape Town, when the cameras spotted Cameron Bancroft using a sandpaper to rub the ball, a crime he later accepted at the end of the day, Warner's name cropped up as being part of the 'leadership group' along with captain Steve Smith in a pre-meditated crime. What followed was massive outburst all over the cricketing world, with even the Prime Minister of Australia calling for action against these 'cheats'.

A Cricket Australia interrogation soon followed, leading to Warner being slapped with a one-year ban. The subsequent fallout included him losing out on his lucrative IPL deal and brand contracts. It was a tough one year for Warner but he seems to have returned a stronger and hungrier man, as evident from his mind-boggling run in the 2019 IPL. It was a no-brainer for Australia to welcome him back to their squads and Warner continues to be a gun batsman for Australia, more so in the shorter formats.

Overseas players are a prized asset to any franchise in the IPL, or any league for that matter. That David Warner has been the most successful overseas batsman in the history of the IPL is saying something. He has scored over 4000 runs over the years in the IPL, with 35 half-centuries and 3 hundreds at a strike-rate in the low 140s and an impressive average of 40.55. Warner has been a key player at the top of the order for the franchises he has represented - Delhi Daredevils from 2009 to 2013, and the Sunrisers Hyderabad since 2014. Warner had an average first season with the Daredevils, scoring at an average of 23, and a relatively low strike rate in the 120s.

The switch to the Sunrisers worked wonders for the southpaw, after he was contracted by the franchise for US$880,000. In 2015, Warner was given the leadership role for SRH. He failed to take his side through to the playoffs, but he won himself the orange cap in the 2015 season for scoring the most number of runs (562). In the following season, he went a step further, leading his side to their maiden title in 2016 by beating RCB in the final. He contributed handsomely in the final, with a 38-ball 69, and ended the tournament as the second-highest run-scorer (848). His side failed to make the final in 2017, but he won himself his second Orange cap (641 runs at 58.27). However, he was banned by the BCCI from playing the 2018 IPL season after ball-tampering allegations in the Newlands Test. He has been cleared to return for the 2019 season, but has been barred from a leadership role. However, as a batsman, he continues to remain a vital cog in the SRH top order and a phenomenal 2019 season where he got the Orange Cap, once again proved the point.

World Cup through the years
The 2019 edition will be Warner’s second World Cup, having been a part of the 2015 tournament at home which was won by the Aussies. He didn’t have a great tournament by his standards, his statistics boosted largely due to the daddy hundred that he got against Afghanistan. Still, he often got the team off to a flier and that helped Australia get early impetus in their innings. Four years later, Warner is a more matured man by on-field and off-field experiences. While he continues to be a nightmare for bowlers, what’s more ominous is his newly found ability to bat long and deep into an innings. Needless to say, he will be a key man for Australia in the 2019 World Cup.