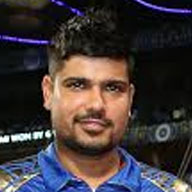 Batting Statistics
Batting Statistics for Karn Sharma. Profile Updated On 19 Wednesday February 2020 042856000000
Bowling Statistics
Bowling Statistics for Karn Sharma. Profile Updated On 19 Wednesday February 2020 042856000000
Profile
Profile for Karn Sharma. Profile Updated On 19 Wednesday February 2020 042856000000
Many remember Karn Sharma for the 2014 Adelaide Test where he was surprisingly thrown into the cauldron of red-ball cricket. A debut against the Aussies in their den is baptism by fire and Karn had a forgettable game although the surface did aid him. The fact that he replaced the much senior Ravichandran Ashwin drew further criticism from the pundits. However, the year was a good one for the leggie as he shone in the IPL season, overshadowing the more senior stars. That enabled him to make his international debut on the England tour that year during the T20I series and consequently got initiated in the 50-overs format as well before that nightmarish Test debut Down Under.

A wrist spinner in the conventional mould, Karn's bonus asset was his clean hitting down the order, producing several handy cameos for the teams that he has featured for. In fact, Karn was actually a specialist batsman when he started out in First-class cricket back in 2007, even racking up a century on debut. However, as time passed, he realized that his major skills were in the bowling department and he soon switched roles as a cricketer. Having had a basic foundation as a batsman has helped him in being a prominent dasher late in the batting order.

Karn has also improved drastically in the domestic circuit. Despite possessing the ideal skills of a leg spinner, there seemed to be temperament issues as far as the longer format is concerned. Some even felt that he was too raw for red-ball cricket during the 2014 season. That might be true as he has definitely matured in the recent past. With wrist spin ruling the roost in international cricket and his utility package in white-ball cricket, Karn would be in the reckoning if he can grab his chances.

Over the years, Karn has been a regular in the IPL and even has achieved a rare feat of being part of successive title-winning teams - Hyderabad in 2016 and Mumbai in 2017. He was picked up by the newly formed Sunrisers Hyderabad in 2013, for whom he picked 11 wickets in his first season. He was the second highest-wicket taker in 2014 with 15 wickets and had a decent run in 2015, before a poor 2016.

Mumbai Indians roped him in for the 2017 season and recorded 13 wickets but was later released into the auctions pool. CSK bagged him in want of an Indian leg-spinner but he did not find a regular place in the side. Although Karn had the ability with the bat, he could not quite showcase his talent in his IPL journey.