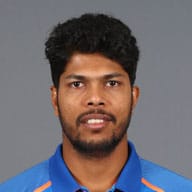 Extremely well-built and unusually fit for an Indian fast bowler,Yadav joined one of the less celebrated teams in the Ranji trophy - Vidarbha. Under the watchful eye of his captain Pritam Gandhe, Yadav discovered and learned the nuances of the leather ball, swiftly earning himself a Ranji debut in 2008 against Madhya Pradesh. He had impressive numbers after his maiden season, picking up 20 wickets at an average of 14.60; however, it was his rapid pace, regularly clocking in the mid-140s along with considerable swing even against the direction of the seam, that caught the eye of the national selectors.

Coinciding with the IPL era, young Umesh was a hot favourite among the franchises for his pace and made his debut in the 2010 edition. Yadav finally got his ODI debut against Zimbabwe the same year but he did not make an impression. On a selection whim, he was named in the squad for the tour to South Africa in December 2010 but had to wait for that coveted Test cap for almost another year, as he made his Test debut at home against the West Indies, becoming the first Test cricketer from Vidarbha. He bagged nine wickets in his first two Tests against the men from the Carribbean, and impressed with the SG ball. However, tougher Tests lay ahead as the rookie pacer was picked for the tour to Australia in December 2011.

India almost didn't show up in Australia as MS Dhoni's team went through a dark transition phase. Nonetheless, the shining light at the end of the tour was Umesh Yadav who impressed with his workhorse attitude, his pace, and most importantly, with the seam movement he could extract with the less-pronounced Kookaburra seam. With 14 wickets in four Tests, he was India's highest wicket-taker on the tour. Alas, a string of injuries followed him after the tour and he was out of the national fold for almost a year.

Yadav returned to international cricket in the 2013 Champions' trophy and did reasonably well to be retained for the 2013 tour of South Africa. With more viable options available and the Indian captain's requirement for control, Yadav remained a fringe player as he had gained the reputation of being a rhythm bowler who could pick up wickets when on song, but struggled for control.

He was roped in by the selectors for the Border-Gavaskar Trophy in Australia in 2014/15 due to the lack of options in terms of fast bowling. Yadav exhibited his potential and penetration with 11 wickets across the last 3 Tests. He was, however, more inconsistent than ever, conceding 45 runs in 3 overs in the final Test in Sydney. Although several of his more expensive spells have been that way due to India's largely incompetent slip catching, contemporary cricket is a game of numbers, and as Alan Wilkins so eloquently put it, 'There's no point in being unlucky'. Yadav had to figure out a way to pick up wickets without the assistance of the fielders.

He regained form at the right time as the Indian fast bowling unit came out all guns blazing for their title defence in the 2015 World Cup in Australia, picking up 18 wickets in the tournament and finishing the tournament as India's highest wicket-taker and the third-highest overall. However, perplexing run in test has been an enigma to many. He has been almost unplayable when on a roll, but has managed to scatter it all over the pitch-map to make for an embarrassing reading for a fast bowler at the international level.

However, the Umesh Yadav that we saw in the home series against South Africa in late 2015, was a transformed one. Starting from the aforementioned series until the away tour in Sri Lanka in early 2017, Umesh Yadav 2.0 has taken over. With a fitter, better-built body, he has been India's reliable figure in an assembly-line of fragile bodies breaking down amidst long tours.

Furthermore, Yadav figured out his optimum trajectory to bowl, making use of the crease and making the ball swing late in its flight. He even managed to start delivering the ball that continues to be an enigma for batsman: the ball that has its seam pointed towards the slip and swings back in due to the pace overpowering the natural aerodynamic behaviour. He has also developed a scrambled seam delivery of a flat trajectory which moves unpredictably off the seam and can catch the best of batsmen off-guard if bowled in the right areas.

He made use of the Dukes ball in the West Indies to bounce batsmen out, and the SG in ball in India's extended home season to skittle some of the best batting line-ups in the world in conditions not particularly favourable for fast bowling. He has shown exemplary control and furious pace with all three brands of red ball over the last 2 years, and the Umesh Yadav, who would just show up in short spurts has been out there for long-haul for the world to witness: Invariably unplayable with the new ball; bowling a spell that batsmen dread and wish to see through unscathed. India has been on the look-out for a tear-away, intimidating fast bowler for a long time, and Yadav, who has just turned 30, is just about at his peak.

His extraordinary home performances beg the question; with his renewed control and fearsome pace, just how good will he be when he goes abroad again? Only time will tell as a quiet fast bowler from Nagpur takes off for Cape Town on his quest to wreak havoc on the Proteas and forge his name in Indian cricketing folklore by earning them their maiden series victory in the rainbow nation.

This remains a dream, however, and the onus remains on India's premier spearhead to fulfill it. 2018 is likely to be a make-or-break year for Umesh Yadav; a year that can propel him to immortality in Indian cricket's hall of fame. A coal-miner's son from Nagpur, now India's premier fast bowler, is India's trump card for their maiden Test series wins in South Africa and Australia.

He was a shock omission when India toured South Africa in 2018, despite a breakthrough season at home where he showed that he was India's premier pacer, possessing swing, seam, and reverse-swing among other arts. India went on to lose the series 1-2. After a noteworthy IPL 2018 for RCB, Umesh once again caught the eye of Virat Kohli, his franchise/national captain, and was picked for the tour of England in mid-2018. After a lacklustre 1st Test, however, he was left out of the side and never made it back to the playing XI in the remainder of the series. Already past the 30 mark, Umesh has a limited number of series to make a mark in Indian history as a historic overseas performer, given the relatively low shelf-life of a fast bowler; and he would hate to be remembered as another Indian fast bowler that could have become a match-winner.

Umesh Yadav has had some very loyal franchises supporting him. First though it was Delhi Daredevils who spotted the raw talent and roped in the speedster for the 2010 season, where Umesh played a handful of games and the figures were also not very impressive. He missed out in 2011 before returning with a bang in 2012 - 19 wickets at 23 and the fourth highest wicket taker.

He had another good spell with the country's capital franchise before moving to Kolkata Knight Riders in 2014. Umesh went there and immediately won the IPL, his contribution being 11 wickets. With the changing nature of the Eden Gardens surface, the India pacer went on to become a crucial member of the KKR team. In his time with Kolkata, Umesh picked up 48 wickets - still the fourth highest in the franchise's history.

However, with an eye to build a team for the future, Umesh was let go for the 2018 edition. Royal Challengers Bangalore took that opportunity and bought him for INR 4.2 crore. He immediately repaid the faith in the management by claiming 20 wickets in his first season and was also retained for the next year. There still is the weakness of bowling at the death and it remains Umesh's achilles' heel.