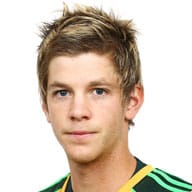 Paine didn't lose hope though and kept working hard, more on his batting skills because he wanted to play as a pure batsman at some point. He gave up the gloves in domestic cricket and was a specialist batsman in their side. Although the runs kept coming, the fact that the only way he could get into the Australian team was as a keeper meant that he continued to be on the sidelines. As time went by, he slowly started to keep wickets in the shorter forms but continued to play as a batsman in the Sheffield Shield. Matthew Wade was the wicket-keeper batsman for them over the years and his success allowed him to be Australia's gloveman for a period of time.

However, a poor 2016-17 season saw Wade starting to fall out of favor among the national selectors. After a 6-year gap, Paine was recalled for the T20I series at home against Sri Lanka although that happened purely due to the Test team leaving early for the India tour. Nevertheless, it did mean that the selectors had started to consider Paine as an option. However, his selection for the 2017-18 Ashes series at home came as a bombshell announcement, especially as he hadn't kept in a First-class game for ages. It seemed like a gamble but Paine passed the test with flying colors, enduring a fine series where his glovework stoodout and at times, his batting as well.

The Ashes heroics means that Paine has now cemented the wicket-keeper batsman slot across formats for Australia although his white-ball game isn't as imperious as it used to be. There is stiff competition from young men like Alex Carey as well but Paine is soaking up the second innings of his career for now and hoping that he can contribute as much as possible. In the Big Bash, Paine has been a key figure of Hobart Hurricanes' top order and also participated in the IPL at one point with Pune Warriors in 2009. Paine's determination to come back despite the injuries has been laudable and Australia will hope that he continues the good work.