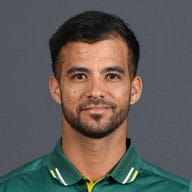 Batting Statistics
Batting Statistics for Jean-Paul Duminy. Profile Updated On 03 Monday August 2020 203942000000
Bowling Statistics
Bowling Statistics for Jean-Paul Duminy. Profile Updated On 03 Monday August 2020 203942000000
Profile
Profile for Jean-Paul Duminy. Profile Updated On 03 Monday August 2020 203942000000
JP Duminy made his ODI debut back in 2004, but it was only during the tour of Australia in 2008-09, that his immense potential with the bat came to the fore. South Africa had come to Australia in the summer of 2008-09 with high hopes of achieving an elusive away series win, but in the first Test match in Perth, they were faced with a monumental 414 to chase in the fourth innings. Ashwell Prince's injury meant that Duminy made his debut, and he helped his team clinch a historic win with a composed 50 not out. In the next Test played at MCG, Duminy went one better with a heart-warming knock of 166 and in the company of the tail took South Africa out of troubled waters after they were reduced to 184/7. South Africa won that Test and clinched the series, winning two Tests from precarious positions. Duminy had played a large part in both, and his international career took off.

If we look back at Duminy's career, he made his First-Class debut in 2001 at the age of 17 for the Cape Cobras. South Africa's strong batting line-up during the early part of the decade meant that Duminy got few chances to impress. He was in and out of the ODI squad for a couple of years until he got his big break as he was selected for both the Test and ODI series in Australia.
He continued to haunt Australia, scoring heavily in ODIs and T20Is, after the breakthrough Test performances. He emerged out of the tour as one of the stars of the game, and the timing of the series suited him very well, as he was snapped up for a whopping USD 950,000 by Mumbai during the auction for the second edition of the IPL. Several factors worked in his favour - most of the top players had been bought at the previous auction, he was an emerging talent, and he just had an outstanding international season.

However, as time progressed, he was worked out. The Australians discovered an Achilles heel' as they peppered him with short stuff when they toured South Africa in 2009. Duminy continued to struggle for runs and he was not at his best in the home series against England in 2009-10, managing just one fifty in eight innings.

He managed to maintain his consistency in the shorter formats of the game, top scoring for the Cape Cobras with an average of 112 and with a strike rate of 140 in the inaugural Champions League T20 tournament. He had also done well in the IPL, and had one of the highest averages in the IPL for Mumbai, more than Sachin Tendulkar and Sanath Jayasuriya.

After making a comeback into the national team, Duminy, unfortunately, suffered an injury on the first day of the first Test against Australia in Brisbane in December 2012. He ended up with a ruptured Achilles tendon in his left heel. He did not take further part in the match and was ruled out for six months. Due to that injury, he missed a major part of the 2013 season. On his comeback from the injury, he essayed an unbeaten 150 in a ODI game against Netherlands, which also helped him to book a place for the Champions Trophy in England. Having ensured a place in the ODI line-up, it did not take long for Duminy to be back for South Africa in whites. He was selected for the tour of Pakistan in the UAE in October, 2013 and celebrated his recall with a fifty on return.

Duminy was under pressure after a string of low scores in Tests, but he silenced his critics with a patient 123 against Australia in Port Elizabeth. He continued his fine form and scored 187 runs in five innings in the T20 WC 2014. When South Africa toured Sri Lanka in June/July 2014, he gave a good account of himself with the bat by amassing a century in the first Test in Galle. However, since then, he has been troubled by a knee injury, but Duminy is a vital cog in the side as he is also a handy off-spinner.

His form continued to dip in the tours that followed. In de Villiers's absence from the Test squad, Duminy got the opportunity to bat at No. 4 for the good part of 2016 and 2017, but he failed to make the impact which was desired of him. Barring a few standout performances, like his century against Australia at Perth, he wasn't doing enough to justify his place in the side. The situation wasn't too different in the ODI format either.

Having been persisted with all this time, a couple of failures in England in mid-2017 saw Duminy released from the squad after just one Test match. Taking the cue, he consequently announced retirement from red-ball cricket altogether in a move to put all his focus on the shorter forms. He continues to be an integral part of South Africa's limited-overs squads and will be aiming a last hurrah at the 2019 World Cup in England. Duminy has played in a lot of franchise T20 Leagues across the globe and is a valuable asset to any team he plays in. His utility off spin and excellent fielding skills are a huge boost in addition to the effective batsman that he primarily is.

Duminy is the most experienced of the South African players taking part in the 2019 World Cup and continues to be an integral part of South Africa's limited-overs squads and will be aiming a last hurrah in England. In the previous two World Cups that Duminy has been part of, the only notable performance came against Zimbabwe in South Africa's opening game. He hit a scintillating 115 not out and put up a record 256-run stand along with David Miller, the highest in World Cups for the fifth wicket.

However, he scored only 49 runs in the next five games to end a mediocre tournament. Going back to the 2011 edition, Duminy had a better outing then - scoring 224 runs in 7 games including a 99 against Ireland. But in the crunch game against New Zealand when South Africa needed someone to stick around and see them through in their 221 chase, Duminy fell for 3.

Since the retirement of AB de Villiers South Africa have found their middle order to be fragile. But with the likes of Duminy and Miller they should breathe a bit easy. The former also gives them some overs of spin which will come in handy with the team combinations.

Duminy like Tahir has announced his retirement post World Cup, so this give him one last opportunity to prove himself and go out on a high.
Top Live News: