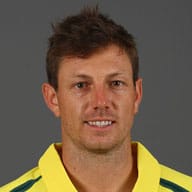 But he remained in the selectors' radar and was selected for the Australia A squad in 2010. Things got better for the youngster in 2011, when he was picked by the Indian Premier League franchise Kolkata Knight Riders for USD 100,000 to play for them in IPL 2011 and 2012. A national call up arrived soon. He was picked in the squad to play an ODI series in Bangladesh after the World Cup. He made his debut in the 3rd and final match of the tour and picked up one wicket. James had a memorable test debut with figures of 5/27 helping Australia beat New Zealand.

Injuries kept him out of the side quite often and he returned to the side to play the away series against India in 2013 after playing the South Africa Tests at home in 2012. He also featured in the 2013 Ashes series in England but was forced out of the side due to injury. He was back again for the final Test against South Africa at Cape Town in 2014, which Australia won to win a hard fought series 2-1. Lack of fitness also meant that he was never a regular member of the limited overs formats as well.

He remained to be in and out of the Aussie sides more because of injuries rather than lack of form. Pattinson played a couple of Tests more in 2015 and 2016 before he was sidelined from the team for a period of nearly 30 months. But Ashes 2019 saw the right arm pace being drafted into the side. Prior to that he auditioned at the county championship and was also part of the Australia A side.

Fun Fact: James Pattinson is the younger brother of Darren Pattinson, who represented England in a Test match in 2008. Unlike his brother Darren, James was born in Victoria after the family migrated and played there throughout his career. He is also a part of the Melbourne Stars in the Australian Big Bash.