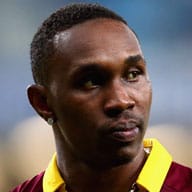 Batting Statistics
Batting Statistics for Dwayne Bravo. Profile Updated On 04 Tuesday August 2020 165116000000
Bowling Statistics
Bowling Statistics for Dwayne Bravo. Profile Updated On 04 Tuesday August 2020 165116000000
Profile
Profile for Dwayne Bravo. Profile Updated On 04 Tuesday August 2020 165116000000
There are hardly any players in the modern era who have been celebrated in the way that Dwayne Bravo has been. Of course, the revolution of T20 cricket, the IPL in particular, played a major role in it but the West Indian's flair and personality have been peerless to be honest. A street-smart cricketer with both bat and ball, Bravo was also an astonishing fielder. All these meant that he was one of the best sought-after names in T20 Leagues. He was made for white-ball cricket due to his versatile skills. Bravo could bowl as a conventional seam bowler but particularly excelled in the slog overs of the innings where was priceless for his side.

As a batsman, he was underrated but continued to chip in whenever needed although it was as a bowler and fielder that Bravo took rapid strides at his peak. His multi-dimensional skills gave him lucrative offers from T20 leagues which led to him preferring those to international cricket. The issues with the Windies board didn't help his cause either. Despite all this, he played white-ball cricket for the Caribbean side consistently till late 2014 when as captain, he initiated a pullout of the team, midway during their ODI tour of India. He was sacked as captain and also overlooked in the format ever since. His T20 fame meant that he did continue to play in the shortest format for the West Indies.

It was the IPL that established the brand of Bravo in the T20 format. After a moderate start in the tournament with Mumbai, the shift to Chennai did the trick for the all-rounder. He went on to become one of the main faces of the franchise along with skipper MS Dhoni and Suresh Raina. His persona matched the franchise's fan base and he was one of the vital cogs of Chennai's success. The fame saw him getting massive offers from the other leagues as well and he soon became a sensation in the format, often being among the most sought after names at the player auctions. Chennai's association with him got a new lease of life after the club retained him with the right-to-match-card at the 2018 auctions. This was after the franchise's two-year exile during which Bravo represented Gujarat.

While most of Bravo's stardom comes from his exploits in franchise leagues, his international performances were also quite valuable. He shone quite a few times in Tests, both with bat and ball, stamping his class as a genuine all-rounder. From his international debut in 2004 till 2008, he had a really good time in national colors but the T20 caravan derailed things thereafter. Constant pay disputes with the Board pushed him to pursue the cash-rich leagues which also gave him immense fame. Bravo quit from Tests in early 2015 although he had virtually exited the format much earlier, having not played the format since 2010.

Bravo is a free-wheeling T20 cricketer these days and is relishing his favorite format. Despite a few injuries in late 2016 and early 2017, he has returned to peak fitness and as shown in the 2017-18 BBL season, he still has enough fuel in the tank, at least for T20s. Apart from his skills, the entertainment he provides through his antics makes him a total entertainer. There is no doubt that Bravo is still an indispensable name in the format and this could be true for the next few years as well. In early 2020, Bravo earned a surprise recall to the West Indies T20I side with it being a World Cup year and one more T20 WC scheduled in 2021. His powers have waned a bit since 2018-19 but he still has the experience which makes him an asset to have in T20s.