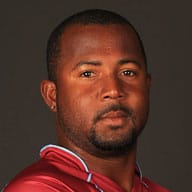 Smith was rumoured to have been recognised as a sizable talent by none other than Vivian Richards himself. He made his debut for West Indies during the 2002-03 tour of South Africa and justified his selection by making a century on debut in the second innings, only the 11th West Indian to do so on debut. The most striking aspect about that knock was that it was just his second First-Class hundred and it came off a mere 93 balls, when his team was battling to save the Test. However, the brilliance was short-lived and that is the last time he has crossed fifty in Tests till date. Smith played nine more Tests for West Indies, shining neither with the bat nor ball. On the same tour, he made his ODI debut as well and did not have any performances to speak of in that format.

Known to be an athletic fielder apart from the obvious talent with the bat, Smith soon found himself out of reckoning for a spot in the national side on account of his repeated failures. He tried his luck in the T20 format, a format which suits his style of play. He signed a Kolpak deal with Sussex, helping them to Division One title in 2008. He represented Mumbai and Hyderabad franchises in the IPL and played for Sussex in the Champions League as well. In the 2014 Indian T20 League auctions, the burly multi-dimensional cricketer was acquired by former champions, Chennai. Smith's strong showing in the shortest format of the game impressed the selectors and he made a comeback to the West Indies side in early 2014 for the T20Is and ODIs against England. Currently, he is one-half of West Indies' explosive opening combination along with the more illustrious Chris Gayle. However, these are still early days yet for Smith as an opener.

Since his comeback, Smith has essayed some fine fifties and missed out on composing his maiden ton when he fell for 97 against India in Delhi. If West Indies have to make a strong case in the 2015 World Cup, Smith has to convert those starts into big ones. The team management would also want him to roll his arm over as they are without Dwayne Bravo and Kieron Pollard for the mega-event.

Smith was supposed to be the ideal foil for another hard-hitter in Chris Gayle and was expected to raise fear in the opposition ranks. However, ability does not always translate into result and Smith was the perfect example of that in the 2015 World Cup, in which he managed to score only a total of 93 runs.