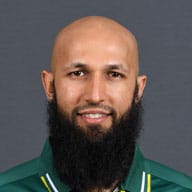 He was appointed captain of his state side - the Nashua Dolphins - at the tender age of 21 and soon impressed everyone with his demeanour. Earmarked as a special talent right from his young age, he led the South African side at the 2002 Under-19 World Cup and made his Test debut against India in 2004-05.

Questions were asked about his mental framework when his talent didn't translate into runs. His technique was thought to be suspect and a couple of failures only reinforced that belief. He was dropped from the side after the initial setbacks and went back to his domestic side and amassed runs to make a comeback. He made a career-saving 149 against New Zealand in Cape Town which ensured a draw.

Now, that knock gave him the self-belief that he could succeed at the international level and runs flowed from his blade. An unbelievable tour of India, where he was dismissed only once in three innings even as the Indians threw everything at him, proved to the world that Amla was the next big thing in world cricket. His run-tally of 490 runs in three innings at an average of 490 in a two Test match series was just simply out-of-the-world stuff.

Despite his magnificent record in Tests, he was always thought to be unsuitable to to the shorter formats of the game, but he proved that wrong by making two hundreds when the Proteas toured the West Indies in 2010 for a five-match ODI series. That performance ensured a permanent place in the South African ODI squad and he was given a chance in T20Is as well.

After Smith resigned from the ODI captaincy when the 2011 World Cup ended, Amla was expected to succeed him, but he chose not to assume the captaincy mantle. He was named the vice-captain of the ODI side.

In 2012, he slammed a triple hundred by scoring 311 against England at The Oval and in the process became the first South African to score a triple century. Amla had a slight dip in form during the end of 2013, where he did not score runs on a consistent basis, but he came back with a bang as he scored a fluent hundred against the touring Australians in the second Test in Port Elizabeth. He also played a major role in getting South Africa to the semi-final of the 2014 T20 WC, where he scored 185 runs in five innings.

Amla continued to pile on the runs as in the ODI series in Sri Lanka, he scored back-to-back hundreds, before notching up one more in Zimbabwe. In fact, he finished 2014 as South Africa's highest run-getter in both Tests and ODIs. He also smashed a double hundred against West Indies in December 2014.

2015 wasn't the greatest year for Amla. He had an average World Cup by his standards, and even his Test form dipped. Captaining a Test team in transition, after Graeme Smith's retirement in mid-2014, it proved to be a struggle for him. The tour of India during the winter further aggravated his misery as South Africa were blown away in the Test matches. Not long after that, early in the new year, Amla resigned as captain.

The resignation came during the series against England at home, after he had slammed a double hundred in the first Test at Cape Town.

Despite not being known as a power-hitter, Amla has also excelled at T20 cricket. He finished sixth on the list of top run-getters in IPL 2017 - a season in which he smashed two hundreds.

The mighty Hash as he is known as has not lived up to his reputation when it comes to World Cups. He scored 306 runs in the 2011 edition at an average of 43.71 including a hundred against Netherlands and a crucial fifty versus India in the chase of 298. However, Amla failed to deliver when it mattered - quarterfinal against New Zealand - he got cheaply for 7 when South Africa were chasing a target of 222.

The 2015 tournament was almost on similar lines - in excess of 300 runs and an average over 40 but he went missing when it came to the big game - semifinal versus New Zealand. Amla scored only 10 and with de Kock also having a poor World Cup, the onus was left on AB de Villiers and Co. to bail them out of troubled waters. They did manage to score 281 but New Zealand overhauled it off the penultimate ball.

Amla's form has not been great leading into the 2019 World Cup. Questions were raised when he was selected in the first place and they will be asked when he is picked in the XI as well, but great players always have a knack of silencing everyone. The tournament in England and Wales might just be the one Amla has been waiting for to allow his bat do the talking. For South Africa to have a good World Cup Amla's form at the top will be important.
Top Live News: