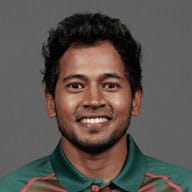 Batting Statistics
Batting Statistics for Mushfiqur Rahim. Profile Updated On 05 Friday June 2020 050239000000
Bowling Statistics
Bowling Statistics for Mushfiqur Rahim. Profile Updated On 05 Friday June 2020 050239000000
Profile
Profile for Mushfiqur Rahim. Profile Updated On 05 Friday June 2020 050239000000
An absolute livewire behind the stumps, Mushfiqur Rahim, fits the clichéd description of wicket-keepers aptly. He is short, very quick behind the stumps, always chuntering away and a brilliant batsman as well. He was initially picked as an understudy to Khaled Mashud for the tour of England in 2005, but as he impressed everyone with his competence with the bat in the tour games, he was made to play as a specialist batsman in the first Test at the age of 16. He thus became the youngest player to play at Lord's. An ankle injury forced him out of the side for a while before being recalled to the side for the tour of Zimbabwe in 2006. His consistent performances saw him pip Mashud as the first choice wicket-keeper for the 2007 World Cup in West Indies. He was soon a part of the Test squad, too, and sealed his spot with a 80 against Sri Lanka in only his third Test.

He continued to make consistent contributions down the order with the bat and was more than competent as a keeper for Bangladesh's spin dominated attack. His moment of fame came in 2010 in a Test against India. He scored a quickfire century, the quickest by any Bangladeshi, and impressed many people with his sound technique. It did not help Bangladesh save defeat, but it certainly put him in the limelight. In fact, Bangladesh look up to him, and a few other talented youngsters, to take them forward.

The Bangladesh Cricket Board then launched the six-team BPL in 2012. The BCB made Mushfiqur the 'Icon Player' for Duronto Rajshahi. Under his leadership, Duronto overcame a poor start to progress to the semifinals, where they lost to Barisal Burners. Rahim scored 234 runs from 11 matches in that season. In the 2012 Asia Cup, under Rahim's captaincy, Bangladesh won two out of the three games they played and reached the final for the first time, where they lost to Pakistan. In April, his grade A+ central contract was renewed. On 11th March 2013, during the first Test against Sri Lanka in Galle, Rahim became the first Bangladeshi to score a double hundred, bettering the previous highest of 190 set by Mohammad Ashraful, earlier in the day.

On May 8, 2013, Mushfiqur resigned from captaincy, but a few days later, announced that he had made a mistake and on July 3, 2013, the BCB said that they would be retaining Rahim as captain until the end of the year. Rahim had an outstanding home series against New Zealand in October and in November 2013, his team drew the first two Tests, won all the three ODIs and lost the only T20I match.
He scored his second ODl century against India in the beginning of the 2014 Asia Cup, but struggled in that match with an injury. Rahim continued to play in the next match against Afghanistan, but the hosts lost the match by 32 runs which was a great disappointment for him and his team. He captained his side in the 2014 T20 WC, being the hosts, they could not live up to the expectations of the fans as they lost all their matches after qualifying for the main tournament.

Bangladesh toured West Indies in August 2014 and were not able to win a single game. However, Rahim showed his worth by scoring his third Test ton. In September 2014, it was announced that Mashrafe Mortaza will be taking over the ODI captaincy while Rahim continue to be the skipper for the longer format. In the home series that followed, he was the leading run-scorer in ODIs, amassing 213 runs in five matches, including two half-centuries. He was also named the Man of the Series for the tournament.
Rahim had a brilliant World Cup personally with the bat in Australia. He gathered 298 runs in six matches. His major contribution. He put on a 141-run stand with Mahmudullah against England that helped his team reach the quarterfinal of the tournament for the first time.

He carried his good form with the bat post World Cup as well. He blasted 220 runs in three ODI matches against a visiting Pakistan team which was blanked 3-0 by the hosts. Rahim was an integral member of the Bangladesh team that tasted success against India and South Africa in the 50-over format at home.
Rahim’s biggest disappointment will have to be the 2016 edition of WT20 held in India where he couldn’t guide his team home against the hosts from a winning position. After hitting back-to-back boundaries off India’s Hardik Pandya, Bangladesh needed just 2 runs in 3 balls, when Rahim went for the glory shot and perished. Bangladesh eventually lost the game by one run and failed to register a single win in the Super 10 stage.

Bangladesh’s next big assignment was against a visiting England team. Having lost the ODI series 1-2, the Asian team were keen to put a better show in the longest format under the captaincy of Rahim. After losing the first game by a close margin of 22 runs, Rahim and Co. won the second match (first Test win for Bangladesh against England) from behind and squared the series 1-1.
Wanting to prove a point away from home, Bangladesh’s most experienced duo - Shakib and Rahim - stitched together a record stand of 359 runs for the fifth wicket with the latter scoring 159, that helped Bangladesh post a mammoth score of 595. When Rahim and Sabbir Rahman were digging it out for a draw in the second essay, a bouncer from Tim Southee hit Rahim’s back of the helmet and he had to be taken off the field. Bangladesh lost the game and in Rahim’s absence lost the second Test as well.

In the one-off Test against India in Hyderabad, he slammed his fifth ton against the likes of Ravichandran Ashwin and Ravindra Jadeja in a losing cause. A month later, Rahim’s Bangladesh toured Sri Lanka. Losing the first Test by a huge margin, Bangladesh came back strongly to win the second game - which was also their historic 100th Test match. In the same match, Rahim became the 41st wicketkeeper in Test history and the first Bangladeshi to reach 100 Test dismissals.

Prior to the Champions Trophy, Rahim had a good outing with the bat in the tri-series held in Ireland. His run-a-ball 45 in the final game of the series, not only fetched him the Man of the Match award, but also put Bangladesh above Sri Lanka in the rankings.Rahim had a fairly successful outing in the 2017 Champions Trophy hosted by England, racking up two fifties from four innings. His form coupled with a semifinal finish for Bangladesh meant that it was overall a satisfactory tournament for the team.

However, bad phases are inevitable in life and Rahim found that the hard way during the tour of South Africa that followed. The trip consisting of two Tests, three ODIs and two T20Is saw Bangladesh being whitewashed across all the formats. The one-sided defeats in the Tests (where he is captain) saw him being under the pump from all corners. He had a have good time in the white-ball format though, as he conjured a ton and a fifty in the three-match series. The absence of the captaincy pressures probably helped him to express himself better.

Rahim will hope to continue his good form and also look to lead by example. Considering the way he broke down to criticism during the Test disaster in South Africa, he would be better advised to be more calm in his approach. Rahim was removed from captaincy after that tour. His excitable nature has often been his undoing during crunch moments and one hopes he gets rid of it gradually to become a better player.