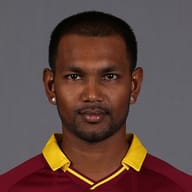 Batting Statistics
Batting Statistics for Denesh Ramdin. Profile Updated On 04 Tuesday August 2020 173436000000
Bowling Statistics
Bowling Statistics for Denesh Ramdin. Profile Updated On 04 Tuesday August 2020 173436000000
Profile
Profile for Denesh Ramdin. Profile Updated On 04 Tuesday August 2020 173436000000
Denesh Ramdin's talent as a solid wicket-keeper and batsman has never been in doubt. Already touted as the future captain when he made his debut, Ramdin, however, has not done complete justice to his talent so far. One thing is clear though, that he is currently their best wicket-keeper. Ramdin, originally began as a fast bowler at the age of 13, but later gave up that ambition to concentrate fully on his wicket-keeping. Ramdin shone brightly and led both Trinidad & Tobago as well as the West Indian Under-19 side before being selected in the national squad at the tender age of 19. He made his debut against Sri Lanka in 2005 and scored 56 runs in his first Test. Ramdin also played his first ODI in the same year in the Indian Oil Cup.

Ramdin's international career took off with a bang. He performed well in most of the matches and was shaping to be a West Indies regular. He made a gritty 71 against Australia 'Down Under', followed by a well-fought 62 against India, later that year. He was particularly impressive against India, putting up a fine display of his wicket-keeping abilities. However, his form as a batsman started slipping after a couple of years. Although, he had a terrible season, he was named as a part of the 2007 World Cup squad. In 2009, he scored his maiden Test century against England in Barbados, but his continued lack of form pushed him out of the side.

Some solid performances in the regional tournament in the 2011-12 season saw him returning to the national side after a gap of almost two years. He joined the Test squad for the tour of England in 2012. After failing in the first two Tests, Ramdin went on to make a superb 107 in the third Test. He, however, spoilt the occasion by flashing a note with “Yeah Viv, Talk Nah” inscribed on it for Viv Richards, who had earlier criticized Ramdin for his poor form on tour. He was criticized severely for this unruly behaviour and fined 20% of his match-fee by the referee.

Ramdin was caught in yet another controversy in the 2013 ICC Champions Trophy in England. Ramdin had claimed a catch of Pakistan batsman Misbah-ul-Haq. However, television replays showed that the ball was not caught cleanly, and the matter was referred to the match-referee. Ramdin was fined his full match fee and suspended for two matches. During West Indies tour of India in November 2013, Ramdin was not up to the mark in both the Tests. He, however, hit an unbeaten fighting 53 in the second innings of the second Test as West Indies folded up for a paltry 187 and lost the series comprehensively.

Ramdin showcased his maturity in New Zealand, lifting West Indies from 86-5 to 286-6 along with Shivnarine Chanderpaul in the third Test in Seddon Park. He scored his fourth Test ton, but it was not good enough to carve out a win for his team. Ramdin's keeping skills have been razor-sharp as he has established himself as the first choice keeper-batsman in the West Indies team across multiple formats.

West Indies awarded Ramdin for his fine form with the Test captaincy. His first assignment was at home against New Zealand. He inspired his side to win the second Test after losing the first, but could not save the series as they lost the last match and the series 2-1. Ramdin, however, tasted his first success as captain when his side beat Bangladesh 2-0, but he could not make any significant contributions with the bat. During the tour of South Africa, Ramdin was tested both as batsman and captain, and he struggled for consistency. Nonetheless, Ramdin did a fine job when it comes to ODIs. He scored 169 against Bangladesh, the only hundred scored by a West Indian wicket-keeper. He followed that with a couple of fifties against India and South Africa.

Ramdin had an average time in the World Cup, but his half-century against Pakistan was vital in securing victory. He endured a difficult time as West Indies' captain and was deposed by Jason Holder after West Indies suffered a 2-0 loss on their tour down-under in 2015-16. He continued to remain as the first-choice keeper and enjoyed a fine run during the triangular series at home, also featuring South Africa and Australia.

During the course of the tournament, Ramdin became the first West Indies wicket-keeper batsman to complete 2000 career One Day International runs. Despite being in reasonably good batting and keeping form, Ramdin was soon eased out of the team from all formats of the game. He wasn't considered for the 2016 edition of the Caribbean Premier League - before being drafted in by St. Lucia Zouks as a late injury replacement. Ramdin was signed up by home-based franchise, Trinbago Knight Riders, for the 2017 edition of the CPL and he played a starring role in their title victory, chipping in with match-winning contributions in several games.

Ramdin finished with 212 runs, second best for his team, but it was his calm personality and his methodical batting that shone throughout the tournament - particularly in the final where he guided his team to their second title triumph amidst a tense and nerve-wracking finish.
Top Live News: