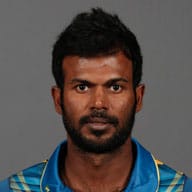 On the back of some good performances against West Indies, he made it into the big league. Tharanga had a bittersweet 2005 -- after having lost his family home to the Tsunami, he earned a call-up to the national team. Kumar Sangakkara was gracious enough to replace his cricketing gear. He had a quiet start to his career, failing to make any significant contributions against top teams. However, the selectors had faith in his ability and their decision to stick with him finally paid off as Tharanga amassed over 300 runs against England in the 5 ODIs in 2006. He scored 2 centuries during that series and was involved in a record-breaking opening partnership with Jayasuriya in the 5th ODI.

After a poor series against India and some ordinary performances in the 2007 World Cup, Tharanga found himself out of the side. Playing for 'A' side against South Africa, he scored 250 runs in 5 ODIs at a strike rate of 101. His coach helped him iron out some technical flaws and made him work on building an innings. He was picked for the 5-match series for Zimbabwe but failed to impress yet again . When recalled again for the series against Pakistan, Tharanga responded with 2 fifties in 5 ODIs and managed to hold onto his place.

He kept up the good work, getting the nod to partner Tillakaratne Dilshan in the 2011 World Cup in the subcontinent. The grace of Tharanga proved to be the ideal foil for the power of Dilshan. Slaying the demons of the previous World Cup, Tharanga came into his own, recording 395 runs in 9 matches at a stupendous average of 56.42 including two tons. The southpaw showed great maturity sealing tricky chases for Sri Lanka, which sometimes appeared out of their compass.

However, the joys of the World Cup performances weren't to last for long. He was soon tested positive for a banned substance, which he pleaded guilty to subsequently keeping him out of the game for three months. The only thing that was consistent post this phase for the next few years was his inconsistency. Despite a career-best 174 against India in 2013, he couldn't cement his place in the side, thanks to a string of poor scores to go with that.

He sprung back into reckoning in the post-2015 era with the batting order crying out for experience with Sangakkara and Jayawardene having hung up their boots. Not just a spot in the side, he was also awarded the skipper's hat in the absence of Angelo Mathews for the tour to Zimbabwe. He currently holds the record of having to wait for the most number of days between two Test centuries in the post World War II era - 10 years and five months.

In one of his many sporadic bursts with captaincy, Tharanga attained the dubious distinction of his side taking taking the longest time ever in the ODI history to finish bowling their quota of 50 overs. He found himself fined and suspended for two games in the 2017 Champions Trophy for 'serious over-rate offences' as the Lankans took 37 extra minutes to complete their quota.

While he continues to struggle in Tests, as was evident in the recent series against the Indians, he now has attained the permanent ODI skipper hat following Mathews' sudden relinquishment of the post after Sri Lanka's dismal performance in the Champions Trophy.

With his experience and the team currently in the rebuilding phase, he remains a vital cog to lift the side from the depths of some pretty dismal performances over the last two years.