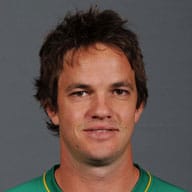 Morkel was an important part of the ODI squad, and his performances for South Africa during that glorious summer of 2008-09 in Australia confirmed his growing stature. Morkel's power-hitting gave South Africa the crucial edge in the first ODI against Australia in Melbourne in 2009. His 18 ball 40 helped South Africa win a close match and this set the tone for South Africa's first ODI series win in Australia. His consistent efforts during the series won him his first Man of the Series award.

He has maintained that level of aggression with the bat in all three formats though his bowling at times can range from erratic to economical. His returns don't make particularly good reading, but he has contributed at crucial times with the ball when the team has needed him.

A strike rate of 81 plus in tests, 139 in T-20s and 102 in ODIs, show that Albie in the mood is as hard-hitting as they come. His power-hitting has helped him bag an IPL contract with the Chennai Super Kings and has been the vital cog in Chennai's good run in the tournament.

The emergence of powerful batsmen such as David Miller and his own dwindling fortunes on the field forced Cricket South Africa to refuse a national contract. Angered by the snub, in April 2013, Morkel stated that his South African career was over and that he did not need to prove anything to anyone. Nowadays, Morkel is considered as a T20 specialist and has been picked to play various Leagues. He has played the Caribbean Premier League, the Friends Provident T20 League in England apart from the IPL.

Some good form in the Ram Slam T20 Challenge and injuries to other all-rounders, Morkel made it back to the Proteas squad for the T20Is. He initially played against Australia before going to Bangladesh for the T20 WC. Morkel had a mediocre WC, he was expensive whenever he bowled and did not contribute much with the bat.

Albie was let go after playing six years for Chennai Super Kings. However, the talents of the big-hitting all-rounder could not be missed as Royal Challengers Bangalore snapped him up in the 2014 auctions. He was then snapped up by Delhi Daredevils in the 2015 auctions.

An ankle injury ruled him out of the 2014-15 South African domestic season and subsequently the World Cup.