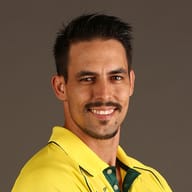 Johnson's stock delivery for right-handers is the one that moves away at an awkward angle. His ability to extract extra bounce on any given wicket adds to his armoury against the left-handers while he also tries to cramp them by bringing the ball back in. The top-order batsmen from the sub-continent have often succumbed to the magic of this 'once in a lifetime prospect' (as termed by Dennis Lillee).

Though often criticised for his waywardness, Johnson still remains one of the best left-arm bowlers in the modern era, more so because of his ability to cover up his weakness by bowling those unplayable deliveries. Johnson was a part of the Australian squad during The 2006 Ashes but never featured in the playing XI. However, when the opportunity knocked his doors, he welcomed it with a red carpet. Taking 4/96 in his debut game against Sri Lanka, Johnson showed glimpses of things to come.

Whenever you set out for a battle, an extra bullet or the extra sword always helps. That's where Johnson's batting ability comes into the picture. The tall Queenslander has the ability to play most of the orthodox shots in the book and his aggressive approach to the game makes him a handy lower-order batsman. He has certainly helped Australia overcome tough situations.

Johnson burst onto the ODI scene by taking 4/11 against a strong Indian batting line-up. Sachin Tendulkar, Rahul Dravid and Yuvraj Singh were among his victims. In the 2007 ODI series in India, Johnson was the highest wicket-taker and played a key role in winning the series for his team.

Mitchell has always relished playing against the Proteas. When South Africa toured Australia in the latter half of 2008, Johnson starred in the second Test by taking 8/61. He also scored a handy 64 batting with Clarke later in the same series. In 2009, when the Aussies travelled to South Africa, Johnson scored an unbeaten 96 which included a 26-run over off Paul Harris. It didn't end there, when the Aussies were staring down the barrel in the third Test, Mitch scored a breathtaking 123 not out, batting with the tail-enders. Johnson was named, the Man of the Series for his scintillating performances.

Johnson's magic started to dwindle in 2009, particularly during The Ashes, where he struggled to pick wickets. He was criticised severely but managed to hold on to his place in the squad. He slowly started to regain the lost touch with notable performances against the West Indies and Pakistan in the same year. In 2011, Johnson, who was dropped for the second Ashes Test, following a poor outing in the first Test, was recalled for the third game and he ended up being the highest wicket-taker for Australia in the series.

Johnson had an up and down 2013. Before the third Test against India in March 2013, Australia dropped him, along with James Pattinson, Shane Watson and Usman Khawaja following a breach of discipline. After that he was subsequently dropped for the Ashes in 2013. But he did well in the sixth edition of the IPL for Mumbai, providing them early breakthroughs. He troubled most batsmen with his pace and bounce and looked the Johnson of old.

For such performances, he was selected for the ODI series against England, where he carried on his good form. He consistently bowled over 90mph and got his line and length right. He had another good tour of India, where he troubled Yuvraj Singh and Suresh Raina with some hostile fast bowling. Due to these efforts he was called back before the final ODI in Bengaluru to prepare for the Ashes Down Under. That decision raised quite a few eyebrows from ex-Australian cricketers since the series was level at 2-2 and it was basically a final.

In The Ashes series in 2013-14, he emerged as the highest wicket-taker, taking 37 wickets from five matches at a mean average of 13.97, which included three five-wicket hauls. He was at his menacing best all through the series as he troubled the English batsmen with his pace and bounce. He continued his exploits with the ball in an away series against the No.1 ranked Test side South Africa, where he was the highest wicket-taker in the Test series, which Australia won 2-1, claiming 22 wickets at 17.36 apiece. He also bowled the most overs - 126.1 - across three innings.

He was not retained by his previous team, Mumbai and in the IPL auctions in February 2014, he was snapped up by Punjab for a whopping amount of Rs 6.5 crores. Johnson continued to trouble batsmen with his raw pace and the Australian team management rested him for a few games to keep him fresh. In the 2014-15 Border-Gavaskar Trophy, after being sledged by Rohit Sharma, he smashed a crucial 88 in Brisbane in the second Test to help Australia gain a healthy first innings lead. He also picked up four wickets in the second innings to derail India. However, a hamstring injury forced him to sit out of the final Test in Sydney and he also missed a few games of the tri-series involving Australia, India and England, in the build-up to the 2015 World Cup.

Johnson picked up 15 wickets in the 2015 World Cup but he played second fiddle to Mitchell Starc, who proved to be Australia's best bowler in the tournament. His best figures came against Afghanistan, as he ripped through their top-order picking up 4 for 22. Johnson is also well known for his batting in the death overs. He proved his mettle against India in the semi-final, hitting 27 off just 9 deliveries and pushed Australia past the 300-mark.

Even though, Johnson had his share of fine performances in the 2015 Ashes, he struggled for consistency. When Australia squared up against New Zealand at home, Johnson looked a pale shadow of his former self at two of his favourite hunting grounds - the Gabba and the WACA - and that perhaps led to him announcing his retirement from international cricket on Day 5 of the WACA Test. It was a decision that took cricket fans and experts by surprise. Johnson though, had the consolation of going past Brett Lee and becoming the fourth highest wicket-taker in Tests for Australia.

It can be argued that the tragic PhIl Hughes incident did have an effect on Johnson, particularly in red-ball cricket where he somehow didn't appear the threat he used to be. By his own admission, Johnson revealed how he used to feel tacky on trying bouncers to batsmen. Nevertheless, post-retirement, he has been having a gala time in franchise T20 Leagues, bowing as fast and furious as he ever had before. The sensational spell of 3/3 off his four overs in the 2017 BBL semifinal and a pivotal last over in IPL final that followed have shown the world that he still has the fire in his belly. Both those teams went on to win the respective T20 leagues which makes these moments sweeter for Mitch. These performances make one feel that perhaps, his decision to retire from international cricket was more emotional than logical.