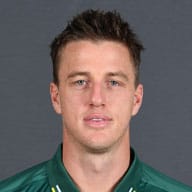 Morkel made his Test debut against India in 2006 at the Kingsmead in Durban and emerged as a frontline bowler for the Proteas in a short span of time. The fact that he burst onto the scene when the likes of Shaun Pollock and Makhaya Ntini were past their prime helped him establish his position in the team.

He was constantly monitored by Allan Donald, which did him a world of good. His ability to hit the deck hard and generate extra bounce at a searing pace has been amongst the primary reasons for his success. He has had his share of injury worries, but his gifted ability to extract awkward bounce from a length at good pace has meant that he has always been a part of the South African bowling attack.

A brief stint with Kent in 2007 helped him get a berth in the inaugural T20 WC, wherein he had all the top-order batsmen hopping and unable to counter his pace and bounce.

In October 2008, him and Albie became the first brothers in 56 years to be named as South African Cricket Annual Cricketers of the Year in the same season. The stint with Kent was followed by a season with Yorkshire in 2008, a season which helped him reinvent himself as a bowler, being bred on green tops. He was picked for South Africa's tour to Australia in December 2008 on the basis of the form he displayed in county cricket, but to everyone's dismay he flattered to deceive, dishing out some insipid bowling spells.

He was once again drafted into the squad for the T20 WC in June 2009 in England, where he had moderate success before being overlooked for the Champions Trophy at home.

He was then picked for the home series against England, in which his match-winning spell with the ball on the first morning of the fourth Test at Wanderers proved to be decisive, going a long way in helping South Africa win the Test and level the series, thus preventing a complete humiliation at the hands of England, whom they had convincingly beaten on their previous tour in 2008.

After a lackluster 2009, Morkel had his best year in Tests to date. He went on to form a formidable combo with Dale Steyn and Vernon Philander, arguably the best attack in the world for the next 2-3 years. Morkel played his 50th Test against Pakistan in Abu Dhabi.

With regards to the IPL, after having little success with Rajasthan, he was picked up by Delhi in 2011 for USD 475,000. He had a moderate first season, where his team finished at the bottom. However, he went on to become the leading wicket-taker in 2012 with 25 sticks, finishing with the purple cap as well. During the 2014 auction, he was picked up by Kolkata.

Morkel finished as the leading wicket-taker for South Africa in the 2015 ODI World Cup. In the next one and a half year, he could only make limited appearances as his participation was mostly hindered due to a back injury. He continued to be a force in the Tests though, pairing up with Kagiso Rabada in Dale Steyn's long injury absence to keep delivering the goods for South Africa.

He was a part of the an in-form South African side that failed to even make the last four at the 2017 Champions Trophy played in England. Morkel had a disappointed outing himself, going for runs and looking increasingly ineffective against the growing skills of helmeted batsmen on flat pitches. With Ottis Gibson's appointment in the lead to South Africa's conquest for a maiden World Cup win, Morkel sought clarity on his limited-overs future in the face of flying rumours about a potential Kolpak contract and found himself back in the fold on cue. Morkel, though, continues to be fragile with injuries without much progress on the bowling front in limited-overs internationals. He missed the ODIs against Bangladesh due to injury and on return had to endure a demotivating series loss to India in the 6-match rubber.