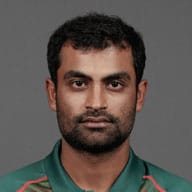 He scored his first century against Ireland, but it was his knock against Zimbabwe at Harare in 2009 which got him top billing. Charles Coventry remained unbeaten when he equalled Saeed Anwar's highest ODI score of 194. However, Tamim launched a brutal counterattack to smash the highest score by a Bangladeshi batsman. His 154 included seven fours and six sixes as Bangladesh went on to win the match.

He has been a little inconsistent in ODIs, but his Test form has been remarkable. He started off his Test debut in style by scoring a pair of fifties against New Zealand in Dunedin in 2008. He scored his maiden Test century against the West Indies in 2009 at Kingstown to help Bangladesh record their first overseas test win. He smashed 151 against India at Dhaka, but it was the England bowling that he relished the most. In six Test innings against them, he has five scores of over fifty. His memorable moment came on the tour to England, when he got his name on the honours board at Lord’s by becoming the first Bangladeshi player to score a century. He scored another ton at Old Trafford to cap off a wonderful summer. His performances in that tour led to Wisden naming him as the Cricketer of the year in 2011. He is currently the second Bangladeshi to play for an English county when he joined Nottinghamshire.

The nephew of former Bangladesh skipper Akram Khan, Tamim has shown that he has the potential to achieve greatness. He was picked by Nottinghamshire as a short-term replacement for David Hussey as he was called up for the National duty. Tamim was not so successful with the bat and he scored just 104 runs with a highest score of 47. He was under immense pressure from the Bangladeshi media especially when he played against Worcestershire, who were fielding Shakib Al Hasan.

Bangladesh toured Zimbabwe in July 2011 for a single Test and five ODIs. Zimbabwe were returning from a six-year exile from Tests, although Bangladesh had not played in the format for more than 14 months. Despite claiming in a press confidence that Zimbabwe's bowlers posed little threat, Tamim managed just 58 runs in the Test as Bangladesh slid to defeat. Bangladesh also lost the ODI series against Zimbabwe 3–2. All Bangladeshi batsmen struggled early in the series, with Tamim managing just 157 runs from five innings at an average of 31.40. In the aftermath of the series, Shakib and Tamim were sacked as captain and vice-captain, with a BCB representative citing their poor leadership.

When West Indies toured Bangladesh in October 2011, he was the leading run-scorer for Bangladesh and he scored 186 runs from 4 innings including 2 fifties. When the BCB founded the Bangladesh Premier League, he was made the 'Icon Player' for Chittagong Kings. His appearance was limited to just 2 matches as he suffered a groin injury and scored just 8 runs. In March 2012 Bangladesh hosted the Asia Cup. Tamim, who was recovering from typhoid, was initially dropped from the squad on the orders of BCB president Mustafa Kamal. Controversy ensued as Kamal had overridden selection committee and Tamim was eventually re-added to the squad. He responded by striking four consecutive half-centuries, becoming the first Bangladesh player to achieve the feat in ODIs. Bangladesh progressed to the final against expectations, though lost to Pakistan by 2 runs. Later that month, Tamim signed with Pune Warriors in the Indian Premier League, but did not play a single match for the team. In April his top-level central contract with the BCB was renewed.

In late October, Wellington Firebirds signed him for the New Zealand domestic HRV Cup, a T20 competition. Tamim became the first Bangladeshi to play in the New Zealand domestic league. Bangladesh hosted West Indies in late 2012, where Bangladesh won the ODI series, despite losing the Test series and the T20I. Tamim scored fifties in both ODIs and Tests and his unbeaten knock of 88 went in vain as Bangladesh lost the lone T20I. After the series, Tamim went back to New Zealand to play for Wellington Firebirds, where he scored 232 runs, including two half-centuries with an average of 38.66. He came back to Bangladesh in mid January to lead Duronto Rajshahi in the second edition of the BPL.

In March 2013, Bangladesh went to Sri Lanka, but Tamim was not selected for the first Test. But in the second Test he made 10 and 59 respectively. In the first ODI, Tamim became the first Bangladeshi to score a hundred against Sri Lanka, when he scored 112 off 136 balls. When Sri Lanka toured Bangladesh in February 2014, he had a quiet series and didn't play in the ODIs due to a neck sprain. Tamim came back into the squad for 2014 Asia Cup and T20 WC but failed to score the runs which his team required. In July 2014, he was a part of the Rest of the World side in the Bicentenary Celebration match at Lord's.

He bounced back strongly against a visiting Pakistan team after the 2015 World Cup. With scores of 132, 116 and 64 in the three match ODI series, he was the Man of the Series and played an instrumental role in whitewashing Pakistan for the first time. He continued his good work in the Tests too, notching up a double century in Khulna in the second innings which helped Bangladesh secure a draw for the first time against Pakistan in Tests. He was also a key member of the Bangladesh set-up that tasted series victories against India and South Africa in the same year. Against Zimbabwe, he scored 132 runs in three games, thereby winning all the four bilateral ODI series at home in 2015.

Tamim opted out of the 2016 Asia Cup due to the birth of his first child. However, he was back for T20 WC, 2016 held in India. Bangladesh had to play the qualifiers, where the opener was at his peak. He scored an unbeaten 83 Netherlands in his team's first match of the tournament. In a must-win encounter against Oman, he struck 103 off just 63 deliveries and became the first Bangladeshi to score a T20I century - thereby becoming the first from his nation to score centuries across all formats. He couldn't hold onto the same form in the Super-10 stage where Bangladesh couldn't win a single game.

His 80 and 118 in the first and third ODIs respectively ensured a 2-1 series victory against Afghanistan. Tamim became the first Bangladeshi batsman to reach 5000 ODI runs when he reached the milestone against England in October 2016. Carrying the good form into the longest format, Tamim slammed his eight Test ton at the Sher-e-Bangla National Stadium and backed it up with a fiery 40 in the second essay that helped Bangladesh post their first ever Test win against England and thereby drawing the 2-match series 1-1.

Barring his fifty in the first innings of the first Test against New Zealand, Tamim didn’t contribute substantially early in the year 2017. However, he regained his touch in Sri Lanka, where he scored 207 runs in two matches. He received the Man of the Match in Bangladesh’s 100th Test match for his matured 82 in the second innings that saw Bangladesh chase down a target of 191. He continued his good form by notching up his eighth ton in the 50-over format that blew away Sri Lanka in the first ODI.

Tamim continued to churn in runs in the tri-series featuring Ireland and New Zealand where he amassed 199 runs at an average around 66. He set the Champions Trophy in England ablaze with a scintillating 128 in the tournament opener and followed it up with scores of 95 0 and 70. Although Bangladesh lost to India in the quarter-finals, they surpassed expectations of many by knocking both Antipodean nations out of the tournament.

2016 - 2017 - a season that saw Bangladesh rise in Test cricket. Test wins against Sri Lanka, England and Australia. All of those wouldn't have been possible sans the supremacy of senior players. And most importantly Tamim Iqbal, the vital cog of Bangladesh's batting for over a decade.

World Cup through the years:

Tamim Iqbal was chosen in the Bangladesh team for the 2007 World Cup after playing just two matches against Zimbabwe. Against India, they were chasing a low score in tricky conditions. With the experienced Zaheer Khan bowling, it would have made sense for someone inexperienced to show respect and play him with caution. Tamim chose to disregard those factors and launched into the Indian bowling with brutal aggression. His six over deep mid wicket after skipping down the track to Zaheer was among the shots of the 2007 World Cup and ever since that knock, he hasn't looked back. Tamim scored a fifty and more importantly the manner in which he scored them helped Bangladesh post a historic win over India. That was one of the reasons why India were knocked out in the group stages. But Tamim struggled with inconsistency post that and scored only 172 runs from 9 games in the tourney.

WC 2011 returned to home and Tamim started off on an explosive note. He scored a strokeful 70 but this time in a losing cause in the tournament opener against the Indians. But as was the case in 2007, he lost steam over the course of the tournament and ended up with only 157 runs as Bangladesh failed to qualify for the quarters.

After a decent series against Zimbabwe in Nov-Dec 2014, Tamim was diagnosed as a grade one tear on his left knee. He underwent a surgery in Australia and recovered in time before the 2015 World Cup. However, he didn't have a great tournament as he managed just 154 runs in six innings, with a best score of 95 against Scotland which provided the platform to chase down a target of 319.

Tamim Iqbal has been on a golden run in the last two years of his ODI career. In his last 24 innings, he has scored 3 hundreds (all away) and 10 fifties with an average of close to 60. He also averages more than 50 in the ODIs in England and will be vital to Bangladesh's cause if they want to perform well in this tournament. His strike-rate might well be a cause of concern to start off but he makes up for it as he has shown so many times. A lot hinges on the experienced southpaw.