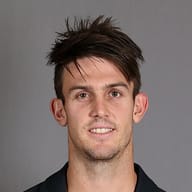 He became a bit of a T20 agent at a very young age. He was drafted into the Pune Warriors squad in 2011 and he was with them until 2013. He also played for the Nagenahira Nagas in the Sri Lanka Premier League. Back home in Australia, he has been a regular member of the side for Perth Scorchers in the Big Bash League since its inception in 2011.

On the back of some impressive performances, the Australian selectors named Marsh in the squad for the Zimbabwe tri-series and he straightaway grabbed eyeballs in the first match of the tournament, with a breezy 89. With Shane Watson being injured, Marsh made his Test debut against Pakistan during Australia's tour to the UAE in October 2014 and he notched up a fine 87 in the Test played in Abu Dhabi. He also did well with the bat in the subsequent ODI series against South Africa and played the first two Test matches of the 2014-15 Border-Gavaskar Trophy, before walking off the field due to a hamstring injury on Day 1 of the second Test in Brisbane. He took no further part in the series, but the selectors picked him in the 2015 World Cup squad as he was expected to be back to full fitness.

Marsh didn't feature much in the tournament which Australia ended up winning. However, with a few retirements after the showpiece event, he get his opportunities and started performing as well. He was able to weigh in with the bat in ODIs while his bowling was always handy. Despite the tag of an all-rounder, it was obvious that Marsh was a better batsman than a bowler and he has started to become consistent in ODIs. The year 2016 was memorable for him as he notched up his first ever century in 50-overs cricket during the bilateral series at home in the Australian summer. In the shorter formats, Marsh is in the process of establishing himself as a key player although he still has a long way to go.

The key for any all-rounder is to gain control of at least one of his skills because the best of the category are those who can be picked solely on any one of those skills. It's time that Marsh started pushing the envelope with the willow which could in turn help him gain momentum with the ball. His form in ODIs and T20s are decent at present but can definitely go up another notch. With the next World Cup in England, it's imperative that sides play at least one good seaming all-rounder and Australia will look up to Marsh for that spot although he does have competition in Marcus Stoinis.

In Test cricket, Marsh has been a stark disappointment till date. Neither has he been able to make a mark with the bat nor has been an enforcer with the ball. There have been the bits-and-pieces kind of performances but it won't be wrong to state that Australia are unsure of what his stronger suite is, as far as red-ball cricket goes. Unlike the shorter formats, his competition in Tests could be with his brother Shaun because the debate in Australia would mostly be regarding a specialist batsman or a batting all-rounder at the number six slot. With age on his side, Marsh has the time to make rapid strides and serve Australia as a potential match-winning all-rounder that he is touted to be. That said, he must also focus more on his fitness because he has also missed quite a lot of games due to injury already. His clean ball-striking and ability to bowl a heavy ball makes him an asset to have.