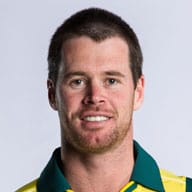 A naturally gifted sportsman, Dan Christian could well have pursued a career in rugby league or other sports but for a cricket career that accelerated when he was in his teens. His Dad, Clem played for the Newtown Jets, his uncle Trevor was an Australian boxing champ, and Dan was a star with a noted league nursery St Gregory’s College in NSW and played in their 2000 national championship team. But two broken legs meant he had to quit football and he started playing cricket after being picked for the Australian Under-19 side.

In 2003, he attended the Australian Cricket Academy and started playing List A cricket for New South Wales in the year 2006 and 2007. He later moved to South Australia after he was not offered a new contract for the 2007/08 season and there he started playing first-class cricket. In 2009, he captained an Indigenous Australian team for a tour of England and there he caught everyone's attention with some brutal hitting. Later he was selected for the Australia's Twenty 20 team. He made his T20I debut for Australia against West Indies in February 2010 and he was also a member of the Australian T20I squad for the 2010 T20 WC.

On March 2, 2012, he made a strong impact in an ODI match against Sri Lanka, where he had impressive figures of 5/31, which included a hat-trick that went in vain as Australia couldn't win the match.

Christian represented Hampshire in the 2010 Twenty20 cup and was part of a winning side that clinched the cup. He was later snapped up by Deccan Chargers in 2011 for a sum of 900,000 USD. He was later purchased in the auction by Royal Challengers Bangalore for IPL-6 in the year 2013 for a sum of 100,000 USD. He was also signed up by Gloucestershire Gladiators to play in the Friends Life T20 competition and he even represented them for a first class game against Australia A. He plays for Brisbane Heat in the Big Bash league and has been a consistent performer for them in all the seasons so far. He is currently the second leading run-scorer and wicket-taker for Brisbane Heat. However, in the 2014 auctions, he got no bidders and went unsold.

By Kiran Nataraj As of March 2014
Top Live News: