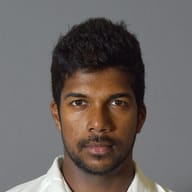 Ever since he was spotted, Aaron has been part of the MRF Pace Foundation in Chennai and works very hard to maintain his pace. A good show in Australia with the India Emerging Players squad earned him a national call-up, where he made his ODI debut against England at Mumbai in 2011.

A few months later, Aaron was given a Test cap against the visiting West Indies. However, injuries forced him to be ignored and he returned to the national fold again in 2014 for India's tour of New Zealand. Since then, he had a brief period of cricket at the highest level, including a good time in the IPL.

However, inconsistency saw Aaron slipping quickly from the pecking order of India's fast bowling department much quickly than he had anticipated. In recent years, he has become a more matured bowler without cutting down on his pace and with age on his side, he can be back in the reckoning for an India spot but will need to toil away in the domestic circuit.

One of the fastest bowlers in India, Varun Aaron’s career has been a sorry tale of injuries deflating his innate talent. Having emerged into the international scene as a raw product capable of clocking 145kph easily, it didn’t take long for Aaron to get an IPL contract. He’s represented the Delhi Capitals, Kolkata Knight Rides and Royal Challengers Bangalore without being a regular starter for any of the sides. Despite possessing high speeds, Aaron’s consistency in lines and lengths were a factor that rendered him ineffective, as you can’t be a one-dimension pace bowler in T20 cricket. The 2014 and 2017 seasons were the most effective ones for Aaron who has shown signs of maturity over the years. He didn’t get a game in the 2018 season and got picked up by the Rajasthan Royals in the 2019 auctions. His inclusion does give RR an aggressive pace option.