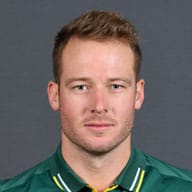 Miller is a left-handed batsman, who is renowned for his power-hitting. He made his debut for the Dolphins at the age of 17 in the 2007-08 season. He averaged only 12.33 in that season as the Dolphins finished fifth. He managed to turn it around in the 2009-10 season when runs flowed from his bat. Although, the results did not exactly go in his team's favour, he finished with 374 runs. He was selected in the South Africa 'A' team for a limited overs series against Bangladesh 'A' and he carried on his good form by scoring 195 runs in five games at an average of 65.

His consistent performances earned him a call to the South African national team for the tour of the West Indies in May-June 2010. It was a tough time for South Africa as they had failed to reach the semi-finals in the 2010 T20 WC. The selectors were on the lookout for fresh faces and Miller was among the players considered. He made his debut in the T20I at North Sound, Antigua.

South Africa were reeling at 59/5 in the 13th over. Miller stepped in and he showed remarkable composure. He hit his third ball in international cricket for a six and as he smashed 33 off 26 balls. His 57-run stand with Johan Botha helped South Africa reach 120/7. It turned out to be a crucial contribution as South Africa went on to win the match by just one run.

Miller then made his ODI debut against the West Indies and he chipped in with some useful contributions with the bat towards the end of the innings. His good form continued in both the T20Is and ODIs against Zimbabwe in October. During that ODI series, he notched up his first fifty off only 30 balls.

He continued to showcase his talent for Durham in the English domestic circuit. He was a consistent performer with the bat, including a gritty 54 off just 41 balls in a losing cause against Yorkshire. Miller was signed up by Punjab for the 2011 IPL season for a price of $100,000 as a replacement for Dimitri Mascarenhas but did not play in a single game.

Miller's fortunes turned for the better in the 2013 edition of the IPL. Miller was the highest run-getter for Punjab. He scored 418 runs at an average 59.71. He scored three fifties and a hundred. The hundred came off 38 balls against Bangalore and is the third fastest in the IPL. His big-hitting was the talk of the town. Miller was retained by the Punjab side in the 2014 auctions.

After a successful IPL, he was named in the South African squad for the Champions Trophy. Since then, he has been a regular member of the ODI and T20I side. Despite having moderately successful numbers, especially since 2016, Miller has often faced unwarranted criticism. It probably has to do with that reputation which he had built due to his IPL heroics. He isn't a batsman who can tonk from ball one in every game but when set, there are few more dangerous batsmen than this dashing southpaw, Over the years. Miller has realised this and has given himself a bit of time before unleashing. The fact that he came in very early into the national team means that he still has enough time, with one more ODI World Cup in 2023 a realistic possibility. He has started to be more consistent across format and given his style of play, Miller is always a sure starter in limited-overs matches.

In 2016, Miller probably played the best knock of his career, pulling off a stunning win against Australia at Durban with a sensational century. Despite being branded as a limited overs specialist by many, Miller hopes to make it to the Test team one day.

David Miller had made his debut just before the 2011 World Cup and had not set the stage on fire. However, he was named in South Africa's preliminary squad made did not make the final cut. By the time the next edition came around, Miller had cemented his place in the set-up and taken over the role of finisher. He scored 324 runs at an average of 65 and strike rate of 139.

He started the tournament with a bang scoring 138 off just 92 balls against Zimbabwe in South Africa's first game. He put up a 256-run stand along with JP Duminy (115*), the highest partnership for the fifth-wicket in all World Cups. Miller also went on to play a whirlwind cameo in the all-important semifinal against New Zealand, smashing 49 off just 18 balls but still ended up on the losing side.