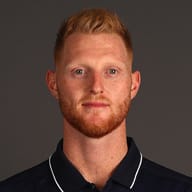 Born on 4 June 1991 in Christchurch, New Zealand, Benjamin Andrew Stokes is the son of rugby league player, Gerald Stokes who represented New Zealand in international Rugby Leagues. His sublime talent was clear from an early age and it was no surprise that he signed on a 2-year county contract with Durham at the age of 18. He made his one-day debut against Surrey in 2009 and marked the occasion by snaring Mark Ramprakash with his 3rd delivery in FC cricket. He played 2 youth Tests against Bangladesh and excelled with both bat and ball. His talent was further noticed in the 2010 U-19 WC where he registered a century against India. He made his FC debut in the season opener against MCC at Abu Dhabi in 2010, scoring his first fifty and picking up a wicket.

Stokes's consistent performances catapulted him into national reckoning and it was no surprise when he was named in the England ODI squad for the one-off match against Ireland and the home series against India. A broken finger meant that he could only play as a batsman. He struggled against India in the ODI series and was dropped from the subsequent away tour of India. After recuperating from the acute injury, Ben Stokes rebounded admirably, compiling 827 runs in addition to capturing 37 wickets at an average of 21.47. His resplendent all-round heroics saw his being ear-marked as the one to eventually fulfill the all-rounder's role that had not been filled since the retirement of Freddie Flintoff.

Expectedly Stokes was named in the England lions development squad for the Australian tour but in a cruel quirk of fate, he was sent back home along with Kent pacer, Matt Coles, for repeated breaches of discipline and unprofessional conduct. Stokes tendered his apology for his irresponsible behaviour and vowed to return to top-flight cricket. He underwent rehabilitation and then earned the third seamer's slot for the One dayers against Australia on the back of his stupendous heroics in Durham's championship winning campaign. His maiden 5-fer, albeit in a losing cause, did not miss the brains trust of the English selectors as Ben Stokes was included in the 17-member squad for the 2013-14 return Ashes Down Under.

Stokes made his debut in the second Test and hit a brilliant maiden Test century in the third Test. Stokes bagged a six-fer in the first innings of the fifth Test and also top scored with 47 runs in the first innings to help England crawl to 155. Although England suffered a humiliating 5-0 whitewash, Stokes had a fantastic series finishing as England's second-highest wicket taker with 15 wickets and third-highest run-getter with 279 runs.

Stokes's form remained more or less solid in the ODI series as well. After starting off on a sedate note, he notched up his maiden ODI half-century in the 4th ODI and took 4 wickets as England managed to seal their first and only competitive win Down Under in 9 games. His impressive performances in Australia helped him secure a place in England's squad to West Indies. Unfortunately, while expressing his disappointment for being dismissed cheaply in a T20I against West Indies, he injured his hand banging a door in the dressing room and was ruled out of the T20 WC in Bangladesh.

After a string of low scores and also briefly out of England’s squad, Stokes showed his class and quality with a thrill-a-minute ton against New Zealand at Lord's in a Test match. He also was in prime form against Australia at Trent Bridge when he plucked a five-for as the hosts reclaimed the Ashes. During the tour of South Africa, Stokes played with sparkle and fizz in Cape Town to crunch the fastest double ton by an Englishman in Tests. Unfortunately, in the T20 WC held in India, he was at the receiving end of Carlos Brathwaite's broad willow as he was smacked for four sixes in the last over of the final at the Eden Gardens. Stokes was shattered as West Indies clinched the title. Subsequently, Stokes sustained a knee injury while playing in a Test match against Sri Lanka in Leeds.

Despite the T20 WC setback, Stokes' career has progressed in a serene fashion. Having missed out the majority of the home season with injury, he returned for the sub-continental tour of Bangladesh and India. He had mixed returns with the bat, but shone with the ball, especially with his ability to get reverse swing. A century and a five-wicket haul was a nice way for Ben Stokes to sign off a tough 2016. A decent Champions Trophy followed, where England were eliminated in the semifinals and just when it seemed like Stokes had the world at his feet, tragedy struck. Not for the first time in his cricketing career, indiscipline hurt him bad and this time it was the biggest ever issue that he had faced. An incident in the Bristol nightclub meant that he was suspended by the ECB until further notice. It was a massive blow to England's Ashes campaign which eventually ended in a 0-4 drubbing.

After spending months out of the game, Stokes got some relief when the ECB decided to include him for the ODI series in New Zealand. While the decision to pick him despite being charged is debatable, it was clearly the lifeline that the all-rounder was looking for. With age on his side, it is expected that Stokes will end up as one of the game's greatest all-rounders of all time. For that to happen though, he shall have to get a grip over his discipline - an issue that has hounded him aplenty over the years. One hopes that the latest incident, which nearly threatened to put a full stop to his international career, makes him to stay on his toes.

A genuine seam-bowling all-rounder who has the ability to hit big shots is a priceless commodity in the T20 format. Therefore, it wasn’t a surprise when Ben Stokes fetched earth-shattering numbers at the 2017 IPL auctions. He was picked up by the Rising Pune Supergiant and in his maiden IPL season, the charismatic Englishman showed why he was worth all the money. He was a gun bowler for RPS, particularly at the death where he executed the yorker and the other variations to good effect. With the bat too, he won a few games single-handedly including an IPL century that was ranked among the knocks of the tournament.

With over 300 runs and more than 10 wickets, Stokes’s 2017 season was terrific and was arguably the most valuable player of that season. At the fresh 2018 IPL auctions, he once again attracted smashing numbers with the Rajasthan Royals snapping him up in an extremely costly deal. However, Stokes neither got going with the bat nor with the ball and was below par in both the seasons (2018 and 2019).

14th July 2019 saw Ben Stokes realising every bit of human emotion. England had taken the game into the Super Over and Ben Stokes was the one who faced the last ball with two needed. He again came out to bat during the super over and scored 8 off 3 to help England reach 15 runs in the one over eliminator. With 16 to win, New Zealand also managed 15 but lost the finale on the boundary count-back rule. England were crowned champions and Ben Stokes was awarded the Man of the Match award. Stokes also scored 5 fifties during the WC campaign and was always the man making the difference towards the end of the innings.

Stokes is at his peak right now and it couldn't get any better for the left-hander when he played an astonishing unbeaten knock of 135 during the Ashes and his last wicket partnership with Jack Leach, who contributed 1 in a stand worth 76 runs as England pulled off a stunning one-wicket win over arch-rivals Australia, in a keenly contested Headingley classic - the same venue where a similar England all-round, Sir Ian Botham, had conjured up that classic 149 in the 1981 Ashes. Can Stokes go one past Botham and become England's folklore hero? Has he banished memories of the night club incident forever? Only time will tell