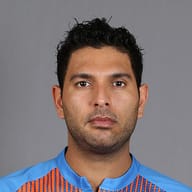 Batting Statistics
Batting Statistics for Yuvraj Singh. Profile Updated On 19 Wednesday May 2021 030157000000
Bowling Statistics
Bowling Statistics for Yuvraj Singh. Profile Updated On 19 Wednesday May 2021 030157000000
Profile
Profile for Yuvraj Singh. Profile Updated On 19 Wednesday May 2021 030157000000
There are very few better sights in world cricket than witnessing a free-flowing Yuvraj Singh at his best. Undoubtedly, he is right up there among the greatest match-winners in white-ball cricket. Those glorious cover drives, slap cuts through backward point and an effortless wristy drop kick over mid-wicket, all oozed class. His full repertoire was on display during his international debut that came in the 50-overs format against Australia in the 2000 Champions Trophy. It wasn't everyday that a batsman put the formidable Aussie attack to sword during that time and certainly not a rookie. Yuvraj had arrived with a bang and what instantly stood out apart from his batting, was the electric fielding skills. India's fielding was on an average level in that era and hence someone like Yuvraj came as a whiff of fresh air.

Despite gaining immediate stardom, Yuvraj wasn't able to capitalize on it with fitness and commitment issues dogging him. But, as he was to show multiple times in the years to come, the lad from Punjab roared back in style, in the 2002 season where he produced quite a few impact knocks, none bigger than the iconic Natwest final heist with Mohammad Kaif. Since that tournament, Yuvraj gradually cemented his spot as a middle order batsman who could build an innings as well as explode at will. His utility left-arm spin also made him a complete limited-overs package and his performances were instrumental in India's steady rise in the shorter formats. They finished runners-up in the 2003 World Cup and despite scoring a lot of runs, Yuvraj still produced some crucial knocks.

Over the next few years, Yuvraj along with the then raw MS Dhoni became vital cogs of the Indian middle order that relished chasing down scores in ODI cricket. The duo often made a mockery of the opposition's target and India at one point even held a record for the most successful run chases in a trot. Yuvraj was gaining at the peak of his powers and one impeccable quality of his was to rise in big tournaments/matches. There were many instances when he was not in great touch but would go on to fire instantly in an ICC tournament. The man simply loved to rock on the big stage and deal with the pressures that came with it.

Such was Yuvraj's ability with the bat that he was well ahead of the T20 format that had just started to spread its wings in 2007. The inaugural T20 WC happened and his strokeplay in that showpiece even is till date regarded as one of the best in cricket's history. Not only did he become the first Indian to smash 6 sixes in an over but also produced a free-wheeling assault in the semifinal against Australia as India surged into the finals and eventually became the champions. Yuvraj particularly enjoyed playing against Australia and as many of his ODI knocks had shown before, he often rose to the occasion.

At times, there were doubts over Yuvraj's ability to play genuine pace and the short ball while some felt that he struggled to start an innings against spinners. All these were just relative terms though for the southpaw because when he was in the mood, there were few who could stop him. Such was his impact on the team that India mostly won the game when he clicked. The IPL caravan came in 2008 and he was the captain of the Punjab franchise in the first few seasons before switching teams. Surprisingly, Yuvraj never really had a runaway IPL season despite all his heroics for India. Of course, he did produce a few knocks here and there but there was never a strong season for him as such.

The 2010-11 season saw a really lean patch for Yuvraj as he was struggling big time to score runs. With the ODI World Cup around the corner, there were concerns on whether he would be in the squad or not. But the then skipper MS Dhoni was adamant and confident of Yuvraj's skills and the dasher repaid his captain's faith in the best possible way - Man of the Tournament award on cricket's biggest stage as India reclaimed the World Cup after 28 years. Yuvraj's impact was hard to miss as he contributed with the bat at vital times apart from also filling in as the fifth bowler with astonishing success. All this apart from his fielding which had started to fade a bit but still in rather good shape.

Post the 2011 World Cup, the tragic news came that Yuvraj had been battling the initial stages of cancer even before the tournament. He barely played any matches in that season and went for rehabs over an extensive period of time. Like his batting, Yuvraj was a fighter in real life too and fought his way back from cancer. However, that fight came at a cost as he wasn't the player he was before the disease hit him. He was a pale shadow of his past during the 2013-14 season and biggest tragedy was seeing him struggle in the T20 WC final of 2014. He was producing the odd good knock during this phase but the fluency of yesteryear was definitely missing. After that T20 WC final, he was axed from India's limited-overs teams and he himself revealed that the body wasn't perhaps fully fit.

Over the next few seasons, Yuvraj worked hard on his fitness and although he missed the 2015 World Cup and 2016 T20 WC, he made a comeback in early 2017 after a strong domestic showing. With the no.4 slot starting to haunt India in a big way, Virat Kohli felt that the veteran would fit the bill, especially with the Champions Trophy due that year. Yuvraj did churn out a few impact knocks after his comeback and even blitzed Pakistan in the Champions Trophy opener. The shots hadn't diminished at all, but what had gone was that consistency and fluency which were now coming occasionally.

After the 2017 Champions Trophy where India finished runners-up, Yuvraj was among a few senior players who were axed from the side. The shocking decline for him was in his fielding which was unthinkable a decade ago. Although the initial reasoning given was 'resting', it was evident that the think tank were looking beyond them with the 2019 World Cup in mind. Yuvraj continues to play domestic cricket and harbors hopes of another international comeback which though, seems unlikely.

Despite all his success in white-ball cricket, Yuvraj was never able to make an impression in Tests. The case is quite similar to Australian great Michael Bevan who endured a fine career in ODIs but struggled in the longest format. Yuvraj also wasn't able to get a grip of red-ball cricket although he did produce a few fine knocks. In domestic cricket, he had played several marathon knocks but wasn't able to replicate that form or consistency at the highest level. Irrespective of what the future holds for him, Yuvraj shall be remembered as one of India's finest limited-overs greats.

In the first round of the 2019 IPL auctions, there were no takers for Yuvraj Singh. It was just another illustration of how this competition doesn't care for reputations. The celebrated left-handed all-rounder was coming off a poor 2018 season with the Kings XI Punjab where he looked a pale shadow of his old self, with just 65 runs from 6 innings.

It was the franchise where he had started off as an icon player in 2008, when he was going through the prime of his career. Under his leadership that year, Kings XI Punjab went the furthest that they've ever gone in IPL till date - to the play-offs. Yuvraj's batting himself was impactful, if not very consistent. Although he scored just one half-century that season, his strike-rate was an impressive 162.5.

But a disappointing season in 2009, both personally and for the franchise, meant that Yuvraj was relieved from captaincy in favour of Kumar Sangakkara, which didn't do much to turn the fortunes of the franchise, but definitely affected Yuvraj's confidence which showed in the performances. It would result in the first of his many franchise switches.

In 2011, barely a week after playing an instrumental role in India winning the World Cup, Yuvraj turned up to lead Pune Warriors who had bought him for USD 1.8 million. And he had his best IPL season yet, finishing as the franchise's top run-getter with 343 runs, but it wasn't enough to keep the team from ending up second-last in the points table.

Yuvraj missed the 2012 season altogether due to his fight with cancer, but returned in 2013, albeit he was nowhere near his best and couldn't do much to lift a sinking Pune campaign. His form notwithstanding, Yuvraj was the most expensive player in the 2014 auction where Royal Challengers Bangalore shelled out INR 14 crores for his services, and then again at the 2015 auction where Delhi Daredevils bought him for INR 16 crores. But the lack of big-money performances couldn't keep him at those franchises for more than a year.

In 2016, Yuvraj was picked up by Sunrisers Hyderabad for INR 7 crores, where he had another couple of middling seasons. He wasn't bad, but it wasn't the Yuvraj people had grown used to, and so another franchise change beckoned, and it would be none other than KXIP who came calling in 2018, offering him the base price value of INR 2 crores. But a return to his original home wasn't enough to bring him back to his old self either. And hence, the first-round snub in the 2019 auctions wasn't completely surprising.

But before the door could possibly be closed on his IPL future, Mumbai Indians reached out at the base price of INR 1 crore. It's the sixth IPL franchise that Yuvraj is set to play for, and it's basically his second home as he's been living in Mumbai for the past 10 years. \"Brings back 2011 memories. That's the first thing that comes to my mind. Good memories. Probably the best memories,\" Yuvraj said in the lead-up to IPL 2019.

Yuvraj Singh announced his decision to retire from all forms of international cricket on June 10, 2019.