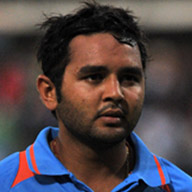 An apparent misfit, the chubby Parthiv went about his job in a very in a composed manner, showing commendable ability with the wicketkeeping gloves and airtight technique with the bat on his way to an impressive 19 in the second innings to avoid an innings defeat. He also traveled with the team to South Africa for the 2003 Cricket World Cup, missing out on his high-school board examinations in the process.

He was persisted with for a year after that, and he impressed with his solid batting lower down the order, essaying a dominating 62 in the company of the great Sachin Tendulkar at the SCG, memorably smashing Brett Lee and co. to all parts and counterattacking to take India to their highest ever total in Tests. Parthiv was particularly impressive in his third consecutive overseas tour against Pakistan where he made a half-century in a losing cause in Lahore before being entrusted with the responsibility of opening the batting at Rawalpindi. Having lost Sehwag, he exhibited dogged resistance along with Rahul Dravid against the hostile pace of Shoaib Akhtar and Mohammad Sami to lead India to a historic first Test series win in Pakistan.

Alas, that was to be the maxima of his career graph for a long time to come. Exasperated with his shoddy glove-work in the subsequent series, Parthiv was dropped from the squad and other alternatives such as Dinesh Karthik were tried before MS Dhoni became a mainstay in the Indian side for the next decade. After some eye-catching performances during the A Tours of Zimbabwe and South Africa and consistent performances in the domestic circuit for Gujarat, he made another comeback to the Indian squad for the 2008 series in Sri Lanka. However, he continued to be unreliable behind the stumps and he lost his chance, with Dhoni making a comeback in the subsequent series.

He has since become a shoo-in to the side as an injury-replacement or a deputy for rested players, scoring a couple of half-centuries in the home ODI series against New Zealand just before the World Cup. However, he did not make the cut, and with Dhoni performing admirably with the bat and the mitts (not to mention being the captain at the helm of affairs), Parthiv remained a fringe player. He continued to make brief comebacks to the ODI fold, making a career-best 95 as an opener in England in 2011. However, a lack of consistent performances and his inability to nail down his spot with big scores made sure that he was axed from the squad again after the CB series in 2012.

He was with the Chennai Super Kings in the first three years of the IPL, delivering some important performances as an opener, especially a 60 in the final of the inaugural edition in a losing cause. He was subsequently shuffled around the IPL circuit, roped in by several franchises over the years.

With the rise of MS Dhoni as a wicketkeeper-batsman and his subsequent reign as captain of the Indian team, Parthiv's opportunities faded - as did the opportunities for most other aspiring wicketkeepers in the country. Parthiv continued to top the run-charts for his Ranji side Gujarat in the domestic circuit. However, the selectors opted for Saha as Dhoni's replacement after he announced his retirement from Tests in December 2014, and Parthiv was the second-choice keeper once again.

Owing to his stellar domestic performances, Parthiv got a call-up to the Indian Test team once again for the third Test against England at Mohali due to an injury to Saha. A more mature Parthiv grabbed this opportunity with both hands and hammered two half-centuries, the second one coming at quicker than a run-a-ball to hastens India's victory. Under a fidgety skipper in Kohli, though, Parthiv once again faded away despite a commendable comeback and continues to play the quintessential backup...

Time remains stands still when it comes to Parthiv Patel. The baby faced wicket-keeper batsman has been part of Indian Premier League since its inception and he's been part of most franchises - six to be precise. He started off with Chennai Super Kings in 2008 and remained in the squad for three years. With MS Dhoni leading the side and keeping wickets, Parthiv was not able to cement his place in the XI.

However, he did play manage to play 13 games in the first season and also aggregated over 300 runs but the rise of Murali Vijay in the next couple of editions, saw Parthiv being sidelined on the bench. Next up was Kochi Tuskers Kerala and that lasted only a year as the franchise was terminated after only one season.

Deccan Chargers became the third side for Parthiv and though he played all the games in his first year there, the numbers were mediocre. The next three editions saw him change three teams - Sunrisers Hyderabad in 2013, Royal Challengers Bangalore in 2014 and Mumbai Indians in 2015.

It was at Mumbai that he had his best season - 339 runs at 26 and the strike rate was 137. He formed a reliable opening partnership with Lendl Simmons and the duo played a key role in helping Mumbai win their second IPL title. Though he slacked off the next year, Parthiv picked up his pace in the 2017 edition - racking in 395 runs at 24 and strike rate of 134 which resulted in another winners medal with Mumbai.

In the IPL there is nothing called as insurance for players. Even after having a good season, Parthiv was let go as Mumbai started to rebuild their team. Bangalore picked him up in the 2018 auctions and he played as a back up 'keeper to Quinton de Kock, but the 2019 season gives him another chance, with de Kock's departure, to prove his mettle.