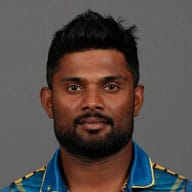 Prasanna's efforts were instantly rewarded as he was handed his ODI debut against Australia within a week's gap. He gained 3 wickets but it could not mask the inadequacies of the batting department with Sri Lanka sinking to a 5 wicket loss. He made his maiden Test and hitherto only appearance in the subsequent Test series against the Aussies in Pallekele.

The Balapitiya-born, however, continues to be an integral part of the limited overs side and sparks occasionally with the bat. His 46-ball 95 against Ireland followed by a quickfire 59 against England in June 2016 was widely acknowledged, but soon faltered as he succumbed under pressure.

He played a stellar role in Sri Lanka's first ever series win in any format in South Africa when he struck a few lusty blows in chasing Sri Lanka's highest T20 total ever. In an innings comprising of three fours and three sixes, he gave his countrymen one small reason to cheer as his side sneaked home to a 2-1 T20 series win in an otherwise winless tour.

With the troika of Herath, Mendis and Senanayake consistently outshining him in the earlier part of his career, he now seems to have developed himself into a hard hitting lower order batsman, especially in the limited overs set up.
Top Live News: