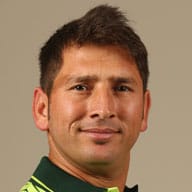 Yasir made his First-Class debut at the age of 15, but a chance to represent the national team came nine years later, when Pakistan faced Zimbabwe in a three-match ODI series in 2011. He picked up two wickets in the match. Yasir has also represented Pakistan 'A' and a host of other domestic sides.

The suspension of Ajmal due to suspect bowling action meant that Yasir got a chance to showcase his skills. The leg-spinner was drafted into the side for the Test series against Australia and New Zealand in October 2014, and he made his debut in Dubai, picking seven wickets in the game. He played the perfect foil to the experienced Zulfiqar Babar, sometimes even doing better than the seasoned campaigner. In the five Tests that he played in the season, Yasir picked up 27 wickets, including his maiden five-wicket haul versus New Zealand.

Even though he had not played ODI cricket for a while, the selectors showed immense faith in him and named him in the 2015 World Cup squad. The tournament, though, wasn't quite a game-changer for Yasir, who played just the one game against India at Adelaide and conceded 60 runs in eight odd overs.

Since then, Yasir has become more of a mainstay of Pakistan's bowling line-up in Tests, with the selectors keen on a different breed of bowlers for the limited-overs internationals. He wasn't even part of the squad for ICC Champions Trophy, 2017 - a tournament that Pakistan defied the odds to win. In September 2017, in the first Test against tourists Sri Lanka, Yasir became the joint second-fastest bowler to 150 Test wickets. He got to the landmark in 27 Tests.
Top Live News: