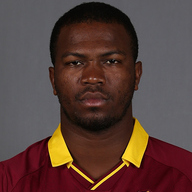 Despite average performances at the domestic level, Charles was drafted into the experimental squad of West Indies for the 2-match T20 series against England in September, 2011. He performed creditably despite struggling to score at a brisk rate. He made a name for himself in the T20 WC tournament in 2012, when he scored a nifty 84 against England. With impressive performances in the T20 WC and also in the Caribbean T20 tournament, he was fast-tracked to the ODI side in 2012. In February 2013, he scored consecutive ODI centuries, his first coming against Australia and second against Zimbabwe 12 days later.

Since then, Charles has been trying to tone down his aggressive batting style and focus on being a responsible opening partner to Chris Gayle in limited overs cricket.

However, with Dwayne Smith rising to snatch the opening slot, Charles has fallen behind in the three-way race. With Gayle ruled out of the tour to New Zealand owing to injury, Charles gained his opportunity but failed to deliver. Charles was also named in the squad for West Indies' T20 Cup defence in Bangaldesh but did not get a look in.

It wasn't that Charles was kept completely out of West Indies set-up, he was named in the squad for the 2015 World Cup, but got to feature in just a couple of games. Despite being not able to nail a permanent position in the batting line-up, Charles kept himself in notice with useful knocks - particularly during the home tri-series in 2015, also featuring Australia and South Africa. However it was followed by a series of low scores against Pakistan and Zimbabwe - resulting in his axing from the 50-over squad.

In a team that boasts of several big-hitters, Johnson has fallen behind the pack after the return of Chris Gayle and the emergence of Evin Lewis. He was a part of the 2016 World Cup winning West Indies team and chipped in useful contributions - none more bigger than the 52 which helped West Indies knock India out of their own party. He followed it up with yet another sparkling innings against India in Lauderhill, but three cheap dismissals soon afterwards led to his exclusion from future West Indian T20 teams.
Top Live News: