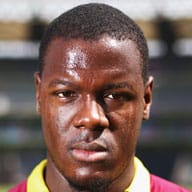 Born in Barbados, Brathwaite first came into the limelight in his debut first-class season in 2011. He had a fantastic debut match against Trinidad and Tobago as he took 7/90 in the second innings of the match. Brathwaite showed great consistency that season, snaffling 26 wickets in eight first-class games. He was rewarded for his performances with a place in the national team for the Bangladesh tour later that year.

He made his international debut in Dhaka, in a T20I against Bangladesh on October 2011. In fact, his ODI debut came only a week later against the same opposition. He was left out of the national squad after that, though, with no substantial contribution in those two games and his next call came about three years later.

A decent 2014-15 season earned him a place in the West Indies squad that travelled to South Africa in January 2015, but he couldn't make it to the World Cup squad that followed right after. Brathwaite was named in the West Indies' Test and ODI squads for the tour of Sri Lanka in October-November 2015.

His Test debut came against Australia in Melbourne later that year. A bowling all-rounder, Brathwaite registered bowling figures of 0/109 but then went on to score a gutsy 59 at No.8, following it up with a more fluent 69 off 71 balls in the rain-affected drawn Sydney Test. Brathwaite's form has dipped since his famous 10-ball 34 against England in Kolkata but he continues to be a big part of Windies' plans going ahead.

'Remember the name' - chirped Ian Bishop on air after the heroics of the 2016 T20 WC final in Kolkata when Carlos Brathwaite stole victory and the T20 WC title from Ben Stokes' and England's grasp. Since then, the Windies all-rounder has been hot property at the Indian Premier League (IPL), having already represented three franchises over a period of four seasons.

Having been brought by the then Delhi Daredevils at 14 times his base price (from rupees 30 lakhs to 4.2 crores), Brathwaite didn't quite live up to the billing - despite decent opportunities with both bat and ball. After two tough seasons, he left for the greener pastures of Hyderabad. Coming into the squad at the back end of the tournament, Brathwaite scored at a good clip and was very effective with the ball - as his franchise made it to the final of the 2018 edition of the championships.

Those performances came in handy for Brathwaite as Kolkata Knight Riders (KKR) came calling with a whopping 5 crore bid - making him their third West Indian buy, after Sunil Narine and Andre Russell.