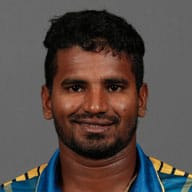 Perera was a regular in the Sri Lankan Under-19 teams since 2007. He, then, debuted for the Colts Cricket Club in 2009. The dashing young batsman etched his name in the Sri Lankan cricket folklore when he slammed 336 from just 275 deliveries for the Colts against Saracens at Havelock Park, Colombo. The hurricane knock, featuring 14 maximums and 29 hits to the fence, is the only triple century in the history of the domestic competition.

His short-arm jabs, pick-up hits and square cuts provoked inevitable comparisons with Jayasuriya. Much like Jayasuriya, Kusal is known to have a penchant for big runs. He carried on, scoring prolifically at the domestic circuit to bang hard on the national selectors' doors. Kusal is a handy wicket-keeper as well.

An injury to Kumar Sangakkara paved way for Perera's ODI debut in Jaunuary 2013 in Adelaide. He batted at Number 4, scoring an unbeaten 14 in a charming little cameo, seeing Sri Lanka past the finish line along with centurion, Thirimanne.

Identifying the spirit of adventure in his batsmanship, the Sri Lankan think-tank bumped him up to the top of the order in the short T20I series that followed the ODIs. Needless to say, the southpaw's pyrotechnics gave the Emerald Islanders the edge.

More success was to follow, this time in the Indian subcontinent, where Rajasthan Royals netted his services for 2013 Indian T20 League, although he was relegated to the sidelines for the bulk of the tourney.

Joining hands with Tillakaratne Dilshan, Perera has provided brief glimpses of tearing open the portal to the 1996 Jayasuriya-Kaluwitharana era. Having enjoyed a successful 2014-15 season in ODIs, Perera earned his maiden call-up for Tests in July-August 2015 against india. He compiled half-centuries in both innings on his debut and became only the second Sri Lankan to do so.

Tragedy struck late in 2015 with a failed dope test, where his urine sample tested positive for a banned substance - forcing the SLC to pull him out of all future tours. His future looked in dismay when he tested positive for a performance enhancing drug, 19-Norandrostenedione in both his 'A' and 'B' samples. However with his board backing him to the hilt, he underwent ploygraphic tests to prove his innocence and came out with success. Not before losing nearly seven months of cricket.

His performances on his comeback remain just as erratic and inconsistent, but it is the potential he threatens to unleash that keeps him in the side on most occasions in all formats. Not for no reason does he boast of the record for the highest strike rate of 272 in an innings of over 50 runs - one where he overtook his lookalike and idol, Sanath Jayasuriya.

World Cup through the years
Not part of the initial 2015 World Cup squad, he was a late draft in for the injured Dimuth Karunaratne midway through the tournament. With opportunities in only a couple of matches - a quickfire 24 in the first batting in the middle-order and a failure opening in the innings in the second - he just didn't have the time to leave an impact as Sri Lanka crashed out in the quarter-finals. Now, with perhaps the best Test innings by a Sri Lankan batsman behind him earlier in the season, he comes into the 2019 World Cup with a senior batsman on whom the rather inexperienced side is going to rely heavily for good starts.