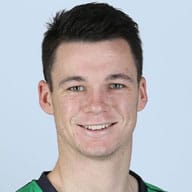 He made a mark for himself on his Sheffield Shield debut for Victoria as an opening batsman in 2011-12 when he scored 71 runs against Queensland at The Gabba. His knock of 113 at the Adelaide Oval in the 2012 domestic season, coupled with wicket-keeping responsibilities in the absence of Mathew Wade, the first choice keeper, bagged him a lucrative contract with the Big Bash League franchise, Melbourne Starts for the 2012-13 season. He further went on to play for Gloucestershire as an overseas player in the 2015 county championship.

He was a part of the Australian ODI squad for their tour to England in 2015 but failed to get a game. In 2016, he was picked up in the IPL auction to be part of the MS Dhoni-led franchise, Rising Pune Supergiants.

A massive stroke of luck came his way as Australia slumped to perhaps their poorest performances in the home series against the Proteas in 2016 as the batsmen put up a listless performance to surrender the series with a match to spare. Handscomb bagged the fruits of the revamp with a Test cap and capped it off with a half-century and the winning shot to stamp his presence on the big stage.

His tendency of always staying on the back foot, however, did have its drawbacks. Handscomb is renowned for his off-stump awareness, and therefore hasn't has much of an issue with the ball leaving him until now. However, since his game is based on the typical back foot and bottom-hand technique, he tends to bring his bat down at an angle from gully rather than from between the wicketkeeper and first slip. This means that the full face of the bat doesn't come down on the ball and this has caused him trouble with the in-seaming delivery. Case in point, his dismissal on Test debut at the Adelaide Oval.

Handscomb was not to be bothered by this small chink in his armour yet, and had a prolific run in Tests against Pakistan at home. He brought up his first Test hundred against Pakistan at the Gabba, essaying a fluent 105 in Brisbane, and another one after that in Sydney, two tests later. Critics continued to be sceptical of his unorthodox technique and his ability to adapt overseas, but Handscomb went his merry way, becoming the first player in history to go 7 Test innings without being dismissed for under a score of 50.

Having made a fine debut at home, the onus was on Handscomb to prove that it wasn't just a one-off innings, and that he was capable of performing overseas. The tour of India was his trial by fire and Handscomb - who had a the reputation for being Australia's best player of spin - was expected to show his grit against the destructive duo of Ashwin and Jadeja in their own backyard. At the end of the tour, it was fair to say that the gritty Handscomb lived up to the unreasonable expectations.

He didn't make too many runs - only once in eight outings did he cross 25 - but his grit and powers of concentration with which he played were impressive relative to the remainder of the line-up who tried to hit their way out of trouble. He played a characteristic match-saving - series-saving, in fact - knock of 72* in the third Test at Ranchi. On a pitch which admittedly didn't hold too many demons, Australia were in a precarious position. At 63/4, after the dismissal of Steven Smith, Handscomb joined hands with Shaun Marsh to stave off the Indian spinners for as many as 71 overs in the unforgiving Ranchi sun. He had managed to rescue his team, crafting an innings of precocious maturity, given the context of the match.

His ability to grind out oppositions was further reinforced later that year against Bangladesh, when he essayed a typically gritty 82, helping Australia win the Chittagong Test and preventing a humiliating Test series loss at the hands of Bangladesh.

Handscomb also plays for the Melbourne Stars in the Australian franchise-based Big Bash League. He has been with the Stars since 2015. Having only scored 5 runs in 2 innings, owing to national duty with the Australian team, Handscomb is a vital cog in the Stars' line-up and the franchise would want him to strike form in the upcoming edition of the BBL.

Handscomb was named in the Ashes squad for Australia's quest to regain the coveted urn at home in 2017/18. He scored 62 runs across three innings in the first two Tests in Brisbane and Adelaide, and was subsequently dropped for the Perth Test after proving to be inept against Anderson and co. under lights in Adelaide. However, with his mental strength and extraordinary powers of concentration, he is more than capable of adjusting his game. He would be looking to claw his way back into the side soon and so that he dons the Baggy Green again.

Interesting Facts
- Handscomb's parents are both British. Peter was born after they migrated to Australia.
- Handscomb has also played some tennis at the junior level, giving him a good knowledge about mechanics of spin on the ball.
- He had a brief stint with Gloucestershire in 2015, to test his technique against the more volatile Dukes ball.