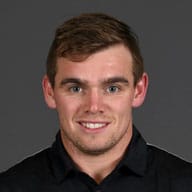 In a rain curtailed match against Sri Lanka, where New Zealand had to chase down 203 in 23 overs, Latham combined well with Luke Ronchi to see his side through to a fine victory. He scored a well-measured 86 which got him the Man of the Match award. He was soon handed his first Test cap against India in 2014 when Ross Taylor was unavailable. Latham was dismissed for a duck in the first innings, but got a start in the second and scored 29. He travelled with the team to West Indies and scored three successive fifties in the first two Test matches.

Over the past couple of seasons, Latham has established himself as an old-school Test opener who grinds out the new ball and sets the stage for the strokemakers later on. One thing he might want to improve on though is converting starts into big scores. As far as the limited overs formats go, after Brendon McCullum's retirement, he seemed to have cemented his place as an opener in the team. He did show a fair amount of consistency but there was a belief that Latham wasn't able to force the pace at will - an imperative skills these days for a limited-overs opener.

Despite being less-aggressive in nature, Latham did produce the goods and had a good time in 2016-17 when he considerably improved his game in the 50-over format. However, he was later slotted to the middle order, mainly for the tour of India due to his ability to play spin. That coincided with the promotion of Munro as an opener and the latter's instant success at the top means that Latham will have to be happy with a middle order slot for the near future. Much like Latham's batting, his glovework is also quite dependable and he has adapted to the role with ease despite not being a specialist by design. This ability of his means that New Zealand have more balance in their side.

Tom Latham alongside Ross Taylor can stitch in crucial partnerships and they've done that on numerous occasions in the past. If New Zealand's top-order fails to get the team off to a good start, the experience of Taylor and the temperament of Latham can brave them out of trouble as we've seen earlier.

Latham's last ODI century came in 2017 against India but since then the southpaw has played 25-odd matches and hasn't come even close to getting a three-digit score in the 50-over format. With ample of opportunities ahead of him during the World Cup, Latham can manage to get a century or two, especially with the pitches expected to be excellent for batting.