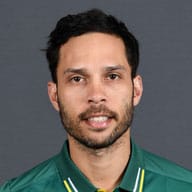 Batting Statistics
Batting Statistics for Farhaan Behardien. Profile Updated On 26 Wednesday February 2020 095135000000
Bowling Statistics
Bowling Statistics for Farhaan Behardien. Profile Updated On 26 Wednesday February 2020 095135000000
Profile
Profile for Farhaan Behardien. Profile Updated On 26 Wednesday February 2020 095135000000
Farhaan Behardien is a handy South African cricketer, who has played for his country in ODIs and T20Is. He is an aggressive right-handed batsman and also bowls medium pace. He plays for Titans and made his First-Class as well as List A debut in the 2004-05 season. He is an agile fielder and was often considered as the next Jonty Rhodes in the making, while playing for Titans. In 2009, he was selected for the South African emerging squad for the tour of Australia. He made his presence felt in the 2009 Hong Kong Sixes tournament, where he represented South Africa and even smashed a last ball six to help the Proteas win over Hong Kong in the final.

He made numerous appearances for South Africa 'A', but couldn't perform on a consistent basis. He averaged 45.66 in the domestic limited-overs competition and 66.60 in T20s. Behardien ended up as the fourth highest run-getter in that T20 tournament and was later named as the South African T20 player of year at their annual awards, which helped him find a route to the national side.

In the first half of 2009, he was an overseas player for Bovey Tracey and he even had a role of a coach of their Under-13 side. He made his T20I debut for South Africa against India in the year 2012. He was also part of the unofficial T20 series in Zimbabwe and was later selected in the South African squad for the T20 WC in 2012 in Sri Lanka. He had a miserable tournament and ended up with a strike-rate of less than 100. In 2014, In the ODI series against Australia, other than a fine fifty in Sydney, he struggled to do well.

He has always been looked up as a cricketer, who can replace one of the middle-order batsmen when they are injured or not available. The selectors though, showed faith in Behardien by picking him for the 50-over World Cup. The right-hander had a decent World Cup, notching up a half-century against United Arab Emirates (UAE). Batting at six or seven, Behardien hasn't got too many opportunities to impress and that has somewhat stymied his progress as a batsman.

A fringe part of the South African line-up, Behardien remains a secondary option for the selectors and didn't play in even a single game during the 2017 Champions Trophy, despite being part of the original 15-man South Africa squad. Named as South Africa's domestic Twenty20 player of the year in 2017, Behardien remains an useful asset at the franchise level and was later picked up by home ground based franchise, Pretoria Mavericks, for the inaugural edition of South Africa's lucrative Twenty20 tournament, Global T20 League.
Top Live News: