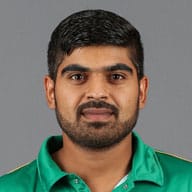 In the limited number of opportunities Sohail has got in ODIs, the southpaw has rather played more than useful knocks. Scores of 41, 51, 44, 52, 89*, 52*, 50, 63 in 8 consecutive innings (from March 2015 to January 2018) show how unswerving Haris Sohail has been in the 50-over format. With the presence of Mohammad Hafeez, Shoaib Malik and the ever so consistent Babar Azam in that middle order, cementing a permanent spot for Sohail in that Pakistani batting line-up would require some time. Probably, converting these 50s into 100s might help his cause.

Apart from his batting proficiency, Sohail's ability to bowl left-arm orthodox spin makes him a great asset to the team. His career best figures of 1-0-1-3 came in the Day-Night Test against Sri Lanka in Dubai and courtesy that spell, Sohail also made it to the record books (best figures for a bowler to have bowled only one over in an innings.) In the Pakistan Super League, Sohail is a part of defending champions Peshawar Zalmi.

World through the years:

Haris Sohail didn't set the stage on fire in the 2015 World Cup but he didn't perform dismally either. He got off to decent starts in almost all the matches but never converted those starts into something substantial. He has made it to the squad again. But it won't be easy for him to feature in the playing eleven as there is stiff competition for a place in Pakistan's middle-order.