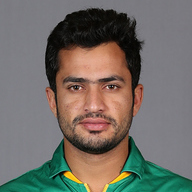 His consistency at the junior level helped him claim a spot in the National Cricket Academy squad (Pakistan) which toured West Indies for the World Championship during the year 2008. Since then he has represented Pakistan U-16's, 19's and had a great run both as a batsman and as a bowler.

He was also a regular member in the national side during the 2012 U-19 World Cup which was held in Australia. He plays for National Bank of Pakistan and Rawalpindi Rams in the domestic circuit and regional T20 league respectively.

Nawaz, who represented Quetta Gladiators in the inaugural Pakistan Super League, impressed one and all with his all-round abilities. He ended up as the third-highest wicket-taker of the season, and was soon drafted into the national side for Asia cup 2016 in Bangladesh.

After making his debut in the Asia cup against UAE, Nawaz didn't take long to commence his career in the other two formats. His ODI debut came against Ireland during Pakistan's tour of England in 2016, and the Test cricket baptism in October of the same year against the Windies. But after three Tests he has been overlooked by the selectors. The presence of Yasir Shah and the emergence of Shadab Khan meant he wasn't picked for the return series to the Windies in early 2017.

He was part of the ODI squad which toured Australia but only got one game on the tour. He was not picked for the Champions Trophy, which Pakistan eventually ended up winning.

When cricket returned to Pakistan in 2017, Nawaz was named in the 15-man squad to take on World XI. Before that, Benoni Zalmi bought him in the Global T20 League drafts.
Top Live News: