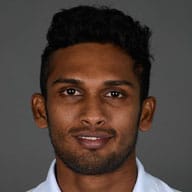 Although he'd made his T20I debut before that against Pakistan, these knocks sprung him into the limelight - something he grabbed with a three-fer against India on  green Pune wicket in 2016. A Test debut followed soon on the tour to England, but it was his ODI debut against Ireland that really stood out, where he became only the third Sri Lankan to pick a fifer on debut. He was further named the Man of the Series.

However, inconsistencies because of how low he bats and the limited opportunities at that position, he couldn't cement his spot in either format and remained in and out over the next three years.

In 2017, things got worse. During a Test match against India at Nagpur, the match referee found him guilty of ball tampering and fined him 75 percent of his match fees.

He made a strong comeback the following year, smashing a 34-ball 65 in an ODI against South Africa, a knock that included four fours and five sixes. He was further named as the skipper of the T20I leg on the tour to Pakistan when most of the senior players backed out citing security worries. He made a bit of history on that tour, winning 3-0 with a weakened side against the then number one side in their own backyard.