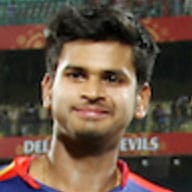 The Grind of Domestic Cricket
Having decimated bowling attacks in his college days, Iyer found a spot in the Under-19 World Cup of 2014. After a lackluster performance on the slow-ish tracks, Iyer was sent to play for the Trent Bridge cricket team in England. With the ball coming on to the bat, Iyer took full toll and shot to the limelight, scoring 297 runs in 3 innings at a Bradman-esque average of 99.

The Trent Bridge stint gave his confidence the activation energy to go on and deliver stand-out performances in the domestic tournaments to follow. He averaged more than 50 in the Vijay Hazare trophy and Ranji Trophy that followed, scoring an incredible 809 runs at 50.56 in his maiden Ranji season. In the subsequent Ranji seasons, his volume of runs bordered on the ridiculous as he amassed 1321 runs in the 2015/16 edition including 7 fifties and 4 hundreds and an unprecedented average of 73.39.

The X-factor and rise to fame
His strike-rate was even more eye-catching and he immediately drew comparisons to legendary Indian batsman Virender Sehwag for his fearless and dominating stroke-play, and more specifically, his hand-eye coordination, even against abrupt lateral movement.

Technique
Iyer’s technique is a typical stroke-player’s technique, built on picking up the line and length early and playing through the line of the ball. However, the trade-off to that technique is committing to the line of the ball early and having too many shots for the same ball. For this reason, Iyer did have a few iffy innings in the 2017/18 Ranji trophy with the ball nipping about off the seam and was beaten and dismissed on bowling-friendly surfaces to shots more suitable on true wickets. However, with age on his side, he has enough time to work on his flaws and cover up the chinks in his armor in the near future.

Rise to International cricket: what the future holds
After scoring a 202 off 210 balls in the practice match against Australia in the lead-up to the home series against them in early 2017, the national selectors could no longer remain oblivious to Iyer and he was selected in the Test squad to replace an injured Virat Kohli. He did not receive a Test cap, however, but was rewarded with a spot in the limited-overs XI in late 2017. His opportunities in these matches don’t offer a large enough sample space to make a judgement about his ability, but given the stats and his attacking stroke-play, he looks like he has the potential to become a future superstar in Indian cricket.

IPL through the years
Shreyas Iyer got a whopping 2.6 Crores from a base price of 10 Lakhs and attained the distinction of being the highest-earning uncapped player of the 2015 auction - the IPL lingo for the most sought-after uncapped player. Pravin Amre, the assistant coach of Delhi Daredevils at that time was responsible for bringing Iyer to Delhi. Iyer didn't let his childhood coach down. He was the talk of the town after scoring 439 runs in the tournament, earning himself the emerging player award and showcasing his aggressive style of play and knocking on the selectors’ doors for an India call-up.

However, the 2016 season was a stark contrast for Iyer as he only made 30 runs in the six innings that he represented Delhi in. The Mumbai lad got his groove back in the 2017 season and managed to score 336 runs with the highest score of 96. But the 2018 season proved to be a breakthrough one for Iyer, he was consistent throughout the season and halfway through the campaign, he became the captain of Delhi after Gautam Gambhir dropped himself from the team. In 2019, Iyer will not only be looking to have a good season as a batsman but also as a skipper. A sensational season might just bring him back in the reckoning for the Indian team for the World Cup.